Peter Stuyvesant was the 7th and final Director-General of New Netherland, [1][2] ruling the colony for 17 years until the English takeover.

"Peter Stuyvesant, also known as Petrus Stuyvesant, is an important figure in the history of New York City [earlier New Amsterdam], New York State and New Netherland. His name is still commonly used, especially in New York State, for street names, school names, building names, etc. A British-German-Danish cigarette brand is also named after him. Surprisingly, his ancestors no longer bear his name. His last direct descendant, Augustus Van Horne Stuyvesant Jr. died in 1953 at age 83 in New York City. A nineteenth century Stuyvesant descendant, Rutherford Stuyvesant, changed his name to Stuyvesant Rutherford in 1863 to satisfy the terms of a will. The paucity of descendants bearing his name may have something to do with the fact that Peter Stuyvesant has been blamed for turning over New Amsterdam to the British in 1664. The blame is not quite fair, because the citizens of New Amsterdam refused to help defend the city against a fleet of British warships. As a result Stuyvesant was forced to hand the city of New Amsterdam over to the British who promptly renamed it New York." [3]

During the persecutions of the sixteenth century some members of the family fled to Holland, where one of them (Samuel Bayard) married Anna Stuyvesant, a sister of Peter Stuyvesant, the first Dutch governor of New York, then New Amsterdam. When he came to take possession of his province, in 1647, his sister, then a widow, accompanied him with her children. Thus was planted on the shores of the New World a race in whose veins flowed the blood of the du Terralls and Stuyvesants, of the good knight "without fear and without reproach," and of the valiant soldier-governor of the province of New Netherlands.

His parents were Balthasar Joannis Stuyfsant and [[[Hardenstein-1|Margaretha|Hardenstein]]]. Peter's father was the pastor of the Dutch Reformed Church of Peperga. [5] Stuyvesant was likely baptized with the name Pieter, but he also went by the Latin form, Petrus. [6] Peter is the English translation of the Dutch name Pieter. [7]

Peter was married to Judith Bayard at the Walloon church in Breda, Brabant on 13 Aug 1645. [10] Judith was the daughter of Balthazar (Lasare) Bayard and Judith de Vos. [11] Prior to their marriage, Judith was Peter's sister-in-law as Judith's brother had previously married Peter's sister Anne.

Together Peter and Judith baptized two children at the Dutch Reformed Church of New Amsterdam.

Peter served in the Dutch Army prior to his appointment as director-general of New Netherland. In 1635, Peter joined the West India Company and, in 1642, became director of the Dutch West India Company's colony in Curaçao. Peter was shot in the right leg during an attack on the Spanish at St. Martin. [16] The leg was eventually amputated and for the rest of his life he wore a prosthetic made of wood. [17][18][19]

"Dated Amsterdam, in New Netherland, 17th September 1644, we having been ordered on the 7th not to call this place otherwise than New-York, on the Island of Manhattans, in America." [23]

Though religious tolerance had begun in the Netherlands, and Willem Kieft, the previous director of New Netherland, had given the English a charter for the town of Flushing in 1645, Peter did not want members of other religions to congregate in New Netherland.

"Stuyvesant, himself a member of the Dutch Reformed Church, opposed religious pluralism and came into conflict with Lutherans, Jews, Roman Catholics and Quakers as they attempted to build places of worship in the city and practice their faiths.[27]

Eventually, the Quakers protesting Stuyvesant wrote the Flushing Remonstrance. [28] The directors of the Dutch West India Company sided with the Quakers and religious freedom was born in America.

"It is considered a precursor to the United States Constitution's provision on freedom of religion in the Bill of Rights." [29]

In 1639, Peter wrote his will. At the time, Stuyvesant was planning to go from Amsterdam to the West Indies. He was not yet thirty but for such a dangerous journey it was customary to make a will. As Peter did not yet have a family of his own, he left everything to his two sisters. [30][31]

Peter died in New York, New York in February or August of 1672. He is buried in a vault beneath St. Mark's Church In-the-Bowery in New York. [32][33] The church also features a stained glass window depicting Peter. [34]

Sponsored Search by Ancestry.com
DNA
No known carriers of Peter's DNA have taken a DNA test. 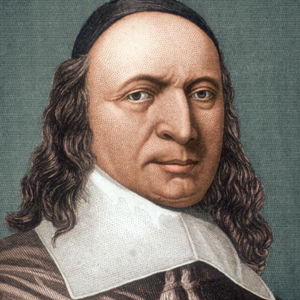 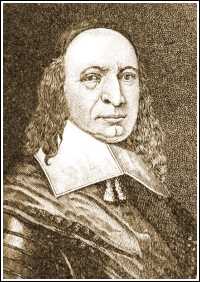 The Fall of New Amsterdam, by Jean Leon Gerome Ferris 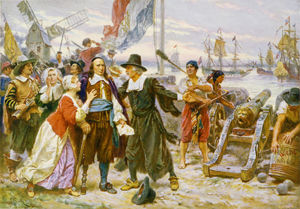 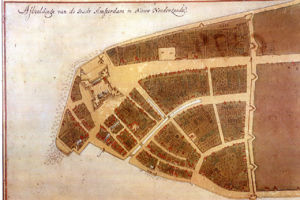 Will the profile manager(s) remove the anachronism "United States" from the deathplace of this 17th century profile? It's a great profile. However, USA didn't exist for a century after he died.

According the sources Pieter (Peter) was born in Peperga and this is mentioned in his BIo as well, this seems quite accurate because , before 1622 his father Balthasar Joannis was working as a minister at a church in Peperga and of course they lived there as well, Pieter was born about 1611 , see his fathers profile for these sources. They moved to Scherpenzeel in 1619 and from there to Berlikum in 1622, so both children Pieter and Anna were born in Peperga . So his birthplace should/can be corrected . Thanks :)