Thomas settled in St. Andrew's Parish by 1767 as stated in his petition of 1768 for a grant of land.[1] He was granted 400 acres in St. Andrew's Parish.[2][3] The grant specifically states that Thomas agrees to pay on the 25th of March each year taxes of 2 shillings per 100 acres to commence after 2 years, and to clear and work 3 acres for every 50 acres within three years, or to keep upon any barren land 3 cattle and 6 sheep or goats for every 50 acres of land.[4] 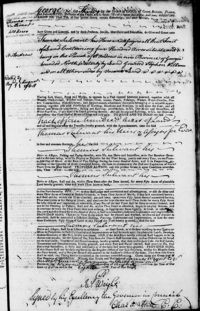 27 Feb 1772, John Eaton and William LeConte had 360 acres in St. Andrew Parish, Georgia surveyed which bounded Charles West and Stephen Williams on the north, Charles West on the east, Grey Elliott on the south, and Thomas Sullivan on the west.[2][6]

02 Aug 1774, John Eaton and William LeConte received a grant of 400 acres in St. Andrew Parish bordering William Davis and Thomas Smith on the southeast, John McLuer and Thomas Cox on the southwest, and by Grey Elliott and Thomas Sullivan on the northeast.[2][7]

01 Nov 1774 John Rivers received a grant of 455 acres in St. Andrew Parish, Georgia bounded on the southwest by Captain Andrew Maybank, northwest by Stephen Williams, Daniel Sullivan and Thomas Sullivan and on the southeast by Thomas Coxe.[2][8]

03 Jan 1775, Thomas Sullivan received a grant of 100 acres in St. Andrew Parish, Georgia bounded on the southeast by William Gibbons, northwest by Jacob Lewis, northeast by Richard Cooper and southwest by White Outerbridge and Smith.[2][9]

In 1795 Thomas along with Roger Qualls and John Marshall, all United States citizens, were traveling through the Creek Nation, and Spanish possessions, when Sullivan and Marshall were apparently apprehended at St. Stephens by the Spanish government and charged on suspicion of being spies for the Americans. The 30 some odd pages of the records are largely in Spanish and of very poor quality imaging, thus extremely difficult to read due to bleed through during the imaging process, however one item included is apparently a copy of their passport, likely as presented to the Spanish government, and reads:

Permissions hereby granted to Roger Qualls, Thomas Sullivan and John Marshall, all Citizens of the United States, to pass unmolested to the Creek Nation and return again the tenth of August. Given at Fort Fidius this 21st day of May 1795. Henry Gaither.[11] 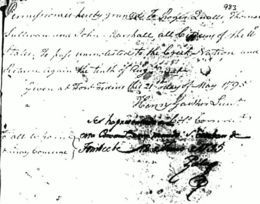 On 29 Oct 1799 an application was presented by William Binion Jr esquire accompanying recommendations from sundry inhabitants of Columbia County, resulting in a order That passports be prepared for Captain WIlliam Binion Jr and Mr. John Roberts, and Mr. Thomas Sullivan as linguist and pilot to them through the Creek nation unto the settlements on the Tombigby and back to this state, which were presented and signed.[12]

10 November 1800 - Owen Sullivant and Anne his wife, James Bilbo and Mary his wife, William Burke and Bridget his wife all of the Mississippi Territory , to Thomas Sullivan, Power of attorney to receive from Robert Walton, their guardian, a tract of 150 acres on Lloyd's Creek adjoining Moses Mathews, and Hezekiah Spires.[13]

On 03 Mar 1803 Thomas has settled in south Alabama as was testified in his claim for public lands: On 28 Mar 1804 Thomas Sullivan presented his claim as follows:

Thomas Sullivan's case No.113 on the docket of the Board, and No.150 on the books of the Register.

Claim- A right of pre-emption of two hundred and forty acres, under the third section of the act.

The claimant presented his claim, together with a surveyor's plot of the land claimed, in the following words and figures, viz:

To the Commissioners appointed in the pursuance of the act of Congress, passed the 3d day of March 1803, for receiving and adjusting the claims to land south of Tennesee, and east of Pearl River.
Please take to notice, that the following tract of land, situated on the west side of Tombigbee River, in the county of Washington, beginning at a black gum, thence, running south seventy-five degrees west, sixty chains to a pine; thence, north fifteen degrees west, forty chains to a stake; thence north seventy-five degrees east, sixty chains to a stake; thence south fifteen degrees east, forty chains to the beginning; containing 240 acres, having such shape, form and marks, both natural and artificial, as are represented in the plot annexed: is claimed by Thomas Sullivant in and by virtue of the third section of the said Act as a pre-emption and is now exhibited to the Register of the Land Offices east of Pearl River, to be recorded as directed by said act. To all which he begs leave to refer, as also to the plot annexed.

Edward Barber and John Denley were produced as witnesses, and being duly sworn and interrogated by the Board, they deposed that hey had no interest in this claim; that the claimant inhabited and cultivated the land then in question on the 3d of March 1803; and that he was on that day the head of a family. The Board ordered that the case be postponed for consideration.

William Gilliam, surveyor, was presented as a witness, and being duly sworn deposed, that he made the plot of the land in question, from a survey which he had previously made, and believed it to be correct; that it included the dwelling house and improvements of the claimant; that he knew of no interfering lines. The Board ordered that the case be postponed for consideration.

In March of 1804 Thomas Sullivan was produced as a witness, and, being duly sworn and interrogated by the Board, testified that he was in no way interested in this claim; that near about the 15th of February 1803, Figures Lewis entered up on the land then claimed and set two negroes to work on the same; that said Lewis lived at another place, but was there every two or three days superintending his business; that his work was continued until he moved there with his family in the spring season following; that on the 3rd of March 1803 his work was progressing, one small house was then finished and two others partly done; that said Lewis had continued to live there ever since he moved on in the spring 1803.[15] 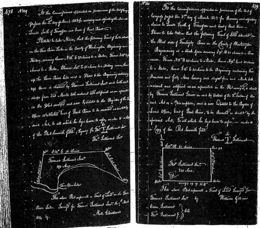 He appears on the 1805 tax list of Washington County, Mississippi Territory.[17] In 1809 the county lines were changed with the formation of Baldwin County. Washington County was greatly reduced in size from 1808 to 1809 by this change and Thomas now found himself a resident of the new county of Baldwin without having to move![18]

Thomas appears on the 1810 census of Baldwin County, Alabama with the following household members:

The household is listed next to that of his son Owen Sullivan, who was living on property adjacent to Thomas along the Tombigbee River in present day Washington County, Alabama.[22]

An appraisement and inventory of the Estate of Thomas Sullivan Sr, deceased taken by the under signed appraisers appointed by the orphans court of Baldwin County in the Mississippi Territory.

One bay gelding $60
One old stud horse $0
One feather bed, bed stead and furniture to the bed $50
Two pine tables @ $3 each $6
Dishes and plates $3
Five chairs 75 cents each $3.75
One larger pewter dish with six large table spoons and three tea sppons and set tea cups and saucers $3
One pitcher $.75
One pair fire dogs $5
One spinning wheel $5
One plow $3
Three aces and one foot govze $3
One hand saw one jack plane $1
One hoe $1
One inch auger and one wedge $2
One large pot and oven $8
One little pot and pair hooks $.50
Two pails and one loom $13
One tea kettle $3
One coffee pot and two tin cups and two glass tumblers, three bobs and one water pitcher $2
Two keelers and two piggins $2
One churn and one large wash bowl $2.50
Two tin cups and one tin pan and two case bottles and one black bottle $1.37
One demijohn and two barrels $4
Double and single, swingle trees $1

The Sullivan lineage of Thomas has been YDNA tested extensively now and has a match to NPE lines currently surnamed both Tate and Stewart. In the case of the Stewart lineage, family lore states that Georgia born Hiram Stewart, son of Mary Stewart and an unknown father, was in fact a Sullivan.[24] Y DNA testing has shown that the family story is indeed accurate and Hiram matches the family of Alabama First Families settler, Thomas Sullilvan Sr.[25]

ask our community of genealogists a question.
Sponsored Search by Ancestry.com
DNA Connections
It may be possible to confirm family relationships with Thomas by comparing test results with other carriers of his Y-chromosome or his mother's mitochondrial DNA. Y-chromosome DNA test-takers in his direct paternal line on WikiTree: It is likely that these autosomal DNA test-takers will share some percentage (beta) of DNA with Thomas: 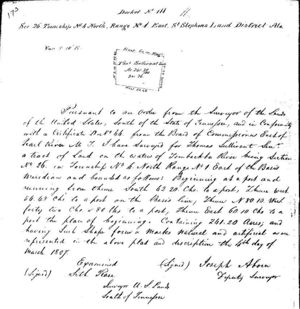 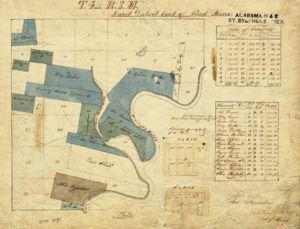 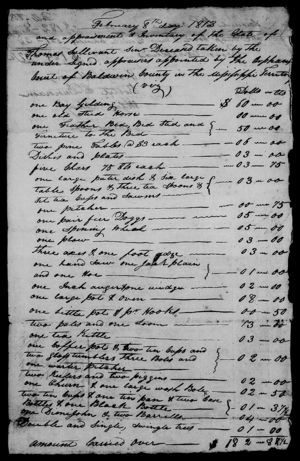 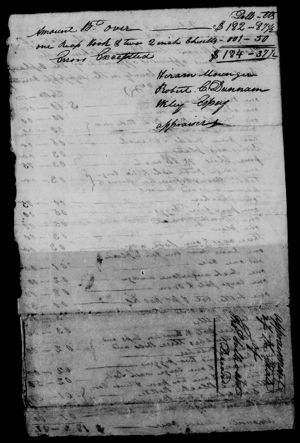 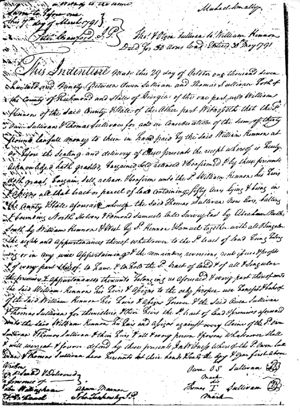