(1) Thomas Sumter, (born August 14, 1734, Hanover county, Virginia [U.S.]—died June 1, 1832, South Mount, South Carolina, U.S.), legislator and officer in the American Revolution, remembered for his leadership of troops against British forces in North and South Carolina, where he earned the sobriquet “the Carolina Gamecock.”

Sumter served in the French and Indian War and later moved to South Carolina. After the fall of Charleston (1780) he escaped to North Carolina, where he became brigadier general of state troops. After successes over the British at Catawba and at Hanging Rock (Lancaster county), he was defeated the same year at Fishing Creek (Chester county). He defeated Mayor Wemyss at Fishdam Ford and repulsed Colonel Banastre Tarleton at Blackstock (both in Union county) in November 1780. After the war Sumter served in the U.S. House of Representatives (1789–93; 1797–1801) and in the U.S. Senate (1801–10). He was the last surviving general officer of the Revolution. Fort Sumter in Charleston Harbor was named for him.

At the end of the Anglo-Cherokee War, in 1761, Sumter was invited to join what was to become known as the "Timberlake Expedition," organized by Colonel Adam Stephen and led by Henry Timberlake (who had volunteered for the assignment). The purpose of the expedition was to visit the Overhill Cherokee towns and renew friendship with the Cherokee People following the war. The small expeditionary party consisted of Timberlake, Sumter (who was partially financing the venture with borrowed money), an interpreter named John McCormack, and a servant.

At one point early in the nearly year and a half long journey, an entry in Timberlake's journal describes Sumter's swimming nearly a half-mile in the icy waters to retrieve their canoe, which had drifted away while they were exploring a cave. The party arrived in the Overhill town of Tomotley on December 20, where they were greeted by the town's head man, Ostenaco (or "Mankiller") and soon found themselves participants in a peace pipe ceremony.

In the following weeks, Sumter and the group attended peace ceremonies in several Overhill towns, such as Chota, Citico, and Chilhowee.

Return to the colonies and a trip abroad

Sumter shares a monument, erected in 1913, on the state capitol grounds in Columbia with two other Revolutionary War generals, Francis Marion and Andrew Pickens.

The party, along with several Beloved Men of the Cherokee, arrived in Williamsburg, Virginia on the James River in early April 1762. While in Williamsburg, Ostenaco professed his desire to meet the king of England. In May 1762, Timberlake, Sumter, and three distinguished Cherokee leaders, including Ostenaco, departed for London. Arriving in early June, the Indians were an immediate attraction, drawing crowds all over the city.

The three Cherokee accompanied Sumter back to North America, landing on about August 25, 1762, in South Carolina where Sumter became stranded due to financial difficulties. He petitioned the Virginia Colony for reimbursement of his travel expenses, but was denied. He was subsequently imprisoned for debt in Virginia. When his friend and fellow soldier, Joseph Martin, arrived in Staunton, Martin asked to spend the night with Sumter in jail. Martin gave Sumter ten guineas and a tomahawk. Sumter used the money to buy his way out of jail in 1766. When Martin and Sumter were reunited some thirty years later, Sumter repaid the money.

Sumter settled in Stateburg in the High Hills of Santee in the Claremont (later the Sumter) District. He married Mary Jameson in 1767, and together they opened several small businesses and became successful planters, and Sumter raised a local militia group.

In February 1776, Sumter was elected lieutenant colonel of the Second Regiment of the South Carolina Line of which he was later appointed colonel. He subsequently was appointed brigadier general, a post he held until the end of the war. He participated in several battles in the early months of the war, including the campaign to prevent an invasion of Georgia. Perhaps his greatest military achievement was his partisan campaigning, which contributed to Lord Cornwallis' decision to abandon the Carolinas for Virginia.

Sumter acquired the nickname, "Carolina Gamecock," during the American Revolution for his fierce fighting tactics. After the Battle of Blackstock's Farm, British General Banastre Tarleton commented that Sumter "fought like a gamecock", and Cornwallis described the Gamecock as his "greatest plague.

After the Revolution, Sumter was elected to the U. S. House of Representatives, serving from March 4, 1789 – March 3, 1793 and from March 4, 1797 – December 15, 1801. He was later selected by the legislature to fill the vacancy caused by the resignation of Senator Charles Pinckney. Sumter served in the Senate until his resignation on December 16, 1810.

Sumter died on June 1, 1832 at South Mount (his plantation near Stateburg), at the age of 97 years. He was buried at the Thomas Sumter Memorial Park in Sumter County

The namesake town, Sumter, South Carolina, erected a memorial to him. The town is dubbed "The Gamecock City" after his nickname. ("Gamecock" is one of the several traditional nicknames for a native of South Carolina.) The University of South Carolina's official nickname is the "Fighting Gamecocks." Since 1903 the college's teams have been simply known as the "Gamecocks."

Fort Sumter in Charleston Harbor, a fort planned after the War of 1812, was named for him. The fort is best known as the site upon which the shots initiating the American Civil War were fired, at the Battle of Fort Sumter.

Counties in South Carolina, Florida, Georgia and Alabama are named for him. 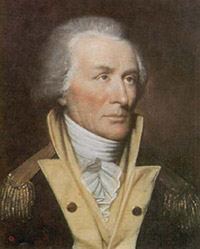 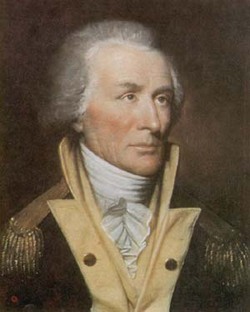 Paula J
I have added the Military and War Project as well as the American Revolution Project because this profile was project protected without project management. It was pointed out that it continues to be duplicated and needs to maintain PPP. Adding both projects will increase monitoring of duplicates.

Robin Lee
Sumter-78 and Sumter-18 appear to represent the same person because: unproven parents have been removed, these are clear duplicates
posted Oct 07, 2020 by Robin Lee

J. (Pearson) Salsbery
Sumter-18 and Sumpter-253 appear to represent the same person because: I removed the unmerged match which was an error to do in the first place. I did not initiate the merge. I approve the merge. Sumter-18 is PP and has no father. Sumpter-253 has a father. This needs to be approved by the Project Manager.
posted Apr 10, 2016 by J. (Pearson) Salsbery

J. (Pearson) Salsbery
Sumpter-253 and Sumter-18 are not ready to be merged because: This merge involving a Project Protected profile needs to be done by a project member I guess.
posted Apr 10, 2016 by J. (Pearson) Salsbery
[Living Thompson]
Sumpter-253 and Sumter-18 appear to represent the same person because: Same name, birth and death.
posted Apr 10, 2016 by [Living Thompson]