"Captain John Sutter, an immigrant from Switzerland,was born on February 15 of 1803 in Kandern, Margraviate, Baden, (a German state in the Holy Roman Empire of Germanic States) a few miles from the Swiss border. As an apprentice to a firm of printers and booksellers, Sutter found the paper business was not for him.

He met his future wife, Annette D'beld, while clerking in a draper's shop, and the two were married in Burgdorf on October 24 of 1826.

Business failures prompted Sutter's decision to seek his fortune in America. At the age of thirty-one, he left his wife and four children in Germany and started his long trip.

After arriving in America, Sutter headed west for Missouri where he worked as a merchant and innkeeper for several years. ...

In 1847 Sutter contracted with James Marshall to build a sawmill on the south fork of the American River about 50 miles east of Sutter's Fort. The sawmill was almost completed when, on January 24, 1848, James Marshall discovered gold in the tail race.

On January 28, 1848 Marshall came to Sutter's Parlor at the fort's main building. Marshall met privately with Captain Sutter to show him the gold he had found at the mill. Grabbing a book, Sutter performed a few simple tests on the yellow metal. "Its gold," he said. Simple words that ignited the imagination of the world.

The following year would forever be known for the thousands of gold-seeking 49ers who abandoned farms and families across the country to search for riches in California.

The Gold Rush hurt Sutter. Sutter's workmen quit working to look for gold. Tens of thousands of new arrivals swept law and order before them, helping themselves to Sutter's land, crops and livestock.[1][2][3] 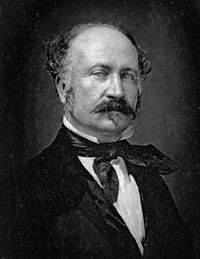