Patrick lived in the Houston area until he was about 20 years old. He spent a lot of that time developing skills like classical ballet, acting in school plays and ice skating. He also played football and started gymnastics. In 1972, he moved to New York to pursue formal dance instruction.

The actor's first professional appearance was as a dancer for Disney on Parade but his breakthrough role came as Johnny Castle in the 1987 film Dirty Dancing. The movie was a low-budget film that was intended to spend one weekend in theaters and go straight to video but it became a surprising hit. It was the first film to sell one million copies on video! Patrick received a Golden Globe nomination for the role and even sang one of the songs on the soundtrack - "She's Like the Wind", a song he co-wrote.

The other role he is perhaps best known for was in Ghost in 1990, starring with Demi Moore and Whoopi Goldberg. In 1991, he was selected by People magazine as that year's "Sexiest Man Alive".

As for his personal life, Patrick married Lisa Niemi on June 12, 1975. The couple met in 1970 when he was 18 and she was 15. Lisa was taking dance lessons from Patrick's mother. They had no children and were married until his death.

In January 2008, Patrick was diagnosed with Stage IV pancreatic cancer. In September 2008, he appeared on Stand Up for Cancer. At that time, he said "I dream that the word 'cure' will no longer be followed by the words 'it's impossible'. Together, we can make a world where cancer no longer means living with fear, without hope, or worse. " 20 months after being diagnosed, on September 14, 2009, surrounded by his family, Patrick succumbed to the cancer and died. 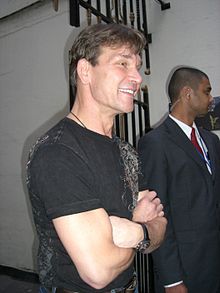 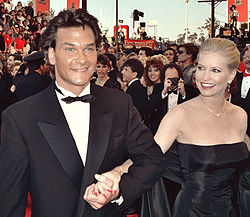 Patrick Wayne is 18 degrees from Jaki Erdoes, 21 degrees from Wallis Windsor and 20 degrees from Henry VIII of England on our single family tree. Login to find your connection.