Jane Margaret was the first child born to William SWEET and Elizabeth nee WHINFIELD. Her birth was registered in Newcastle upon Tyne in the June Quarter of 1841. 1851 Census: age 9 with her parents in Albion Place, St Andrews, Newcastle upon Tyne. The family at home on census night comprises brothers Richard Whinfield, Stephen Bulman (the second), and William John (the second) and a cousin, Jane H. AMOS, 17. Jane Margaret’s father, a Solicitor’s Managing Clerk at the census, died in the December Quarter of 1851. Her mother married Henry Thomas SCRIVENER, a Draper from Bridlington, in 1856. He was 24 years old, 19 years younger than the widow Sweet. 1861 Census: Henry Scrivener was head of the household in Albion Place. Jane Margaret, 19, Stephen Bulman, 13, and William John, 11 were described as Henry’s Daughter/Sons In Law. Henry’s occupation was given as Mustard Manufacturer Employing 2 men. William Sweet’s father Samuel had been a Mustard Manufacturer. Henry may have seized a takeover opportunity when he married Elizabeth but he was unsuccessful in the venture and declared bankruptcy in 1862. On 15 May 1867, Jane Margaret married Charles Waters SCRIVENER, the younger brother of her stepfather, in Filey St Oswald’s Church. She was then either heavily pregnant or had recently given birth to her first child, William Charles. The boy’s birth was registered in Newcastle upon Tyne in the same quarter as the marriage. Jane Margaret’s second child was born in Filey in Spring the following year, after her mother’s death towards the end of the previous year. The baby girl was named Elizabeth but lived for only a few days or weeks. Jane Margaret’s third child, Thomas Stephen Widrington, was born in the summer of 1869. 1871 Census: Jane Margaret’s husband Charles, a Medical Doctor, headed the household in Clarence Terrace, Filey. First child William Charles, 3, was with his grandfather on census night and Mary Elizabeth Sweet, Jane’s sister, may have been on an extended visit helping to look after baby Thomas, aged 1. Jane died four weeks after this census, on 28 April, and was buried in Filey St Oswald’s churchyard. Her elder son, William Charles, drowned from the North Shields brig Eugenie in 1886 when he was 19. Younger son Thomas married Lilian Eliza HUTTON in Scarborough 1899 and died aged 53 in Leeds. About eighteen months after her death, Charles Waters Scrivener married Mary Ann WOODALL. They did not have any children. Charles died in June 1882 and was buried in Filey St Oswald’s churchyard, some distance from his first wife’s grave. 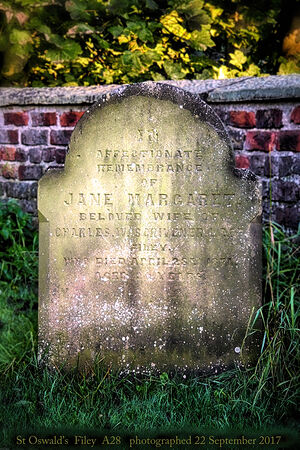