For a PDF of Symmes's bio and sources as it appeared here through 11 September 2019, click here.

Zachariah Symmes was born on 5 April 1599 in St. George's, Canterbury, England, the youngest of three known children and the younger of two sons of William and Mary Ingleram Symmes.

In 1620, he graduated from Emanuel College, University of Cambridge.[1]

On 13 August 1622, when he was twenty-three, he married Sarah Baker in St Saviour Parish Southwark, Surrey, England [2]

She bore him twelve children, four sons and eight daughters:

In 1634, when he was thirty-five, he migrated to New England from Dunstable, Bedford, England, aboard the Griffin, arriving in Boston on the 18th of September.[3]

On 4 February 1670[/1], when he was seventy, he died in Charlestown, Suffolk, Massachusetts.

Biographical sketch from Annals of the American Pulpit

Zechariah Symmes was born in Canterbury, England, April 5, 1599. His father, the Rev. William Symmes, who was ordained in 1588, has sufficiently indicated his own character by the following testimony in respect to his parents, and the following charge addressed to his children, which he inscribed on the flyleaf of a book, in the year 1602: "I note it as a special mercy of God that both my father and mother were favourers of the Gospel, and hated idolatry under Queen Mary's persecution. And I charge my sons, Zechariah and William, before Him that shall judge the quick and the dead, that you never defile yourselves with any idolatry or superstition whatsoever, but learn your religion out of God's Holy word, and worship God as He Himself hath prescribed, and not after the devices and traditions of men."

Zechariah Symmes gave indications not only of a serious turn of mind, but of hopeful piety, from very early life. He was educated at the University of Cambridge. After leaving the University, he was employed as tutor in several distinguished families; and in 1621 was appointed lecturer at Atholines in London. In September, 1625, he left London, and became the Rector of Dunstable]. But being subjected to serious embarrassment in his ministry, in consequence of being a nonconformist, he resolved to migrate to New England; and, accordingly, he arrived on these shores in August, 1634. He was a passenger in the same ship with the celebrated Mrs. Anne Hutchinson, who was afterwards the occasion of so much trouble to the churches. He was admitted to the fellowship of the church in Charlestown, on the 6th of December following; and on the 22d of the same month, which was observed as a day of humiliation and prayer, he was elected and ordained teacher of the same church, the Rev. Thomas James being already its pastor.

The relation between Mr. James and the church seems not to have been a happy one. After Mr. Symmes had been settled about a year, a difficulty which had for some time existed between Mr. James and the people, in which Mr. S. also had come to be involved, came to a crisis, and resulted in the dismission of the pastor, when Mr. S. succeeded to the vacant office. The office of teacher was then vacant about three years; though the Rev. John Harvard, during a part of this time, supplied the pulpit as Mr. Symmes' assistant. In 1640, the Rev. Thomas Allent was associated with Mr. Symmes, as teacher; but, after filling the place about ten years, he returned to England. Mr. Symmes was now left alone in the ministry till the year 1659, when he was again relieved by receiving Mr. Thomas Shepard as his colleague. As Mr. Symmes' faculties were found to be gradually waning, an attempt was made, in 1669, to associate with him another assistant, namely, the Rev. John Oxenbridge; but this proved unsuccessful, as he accepted, about this time, an invitation to settle in Boston. Mr. Symmes died on the 4th of February, 1671, within a month of completing his seventy-second year, and in the thirty-seventh year of his ministry at Charlestown. He preached the Annual Election Sermon in 1648.

Mr. Buddington, in his History of the First Church in Charlestown, (himself the pastor of the church,) says:

" Mr. Symmes appears to have been held in esteem by his contemporaries, and when we remember who they were, this is no small praise. In respect to ability and literary attainments, he appears to have been respectable; but if we are authorized to form an opinion from the slender information we possess respecting him, he was more distinguished for his practical talents and general usefulness. 'He knew his Bible well,' says Cotton Mather, 'and he was a preacher of what he knew, and a sufferer for what he preached.'"

Some idea may be formed of his remarkable gift of endurance, from the fact that, on the occasion of the organization of the church at Woburn, he is said to have "continued in preaching and prayer about four or five hours." His treatment of the Baptists seems to have been marked with some degree of severity.

Mr. Symmes lived with his wife Sarah almost fifty years. She is represented as having been eminent for faith, fortitude, cheerfulness and industry. They had thirteen children, five sons and eight daughters.[4]

Is Zachariah your ancestor? Please don't go away!

ask our community of genealogists a question.
Sponsored Search by Ancestry.com
DNA
No known carriers of Zachariah's DNA have taken a DNA test. 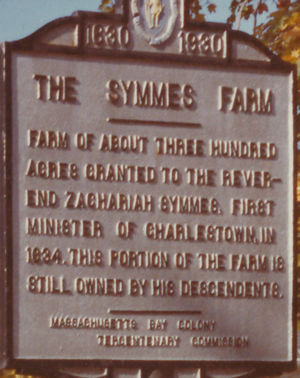 Leave a message for others who see this profile.
There are no comments yet.
Login to post a comment.
Chris Hoyt
Symmes-110 and Symmes-7 appear to represent the same person because: Same dob and location: same dod and location. Please merge. Thanks
posted Mar 05, 2016 by Chris Hoyt