William Howard Taft was the twenty-seventh president of the United States. He served from 1909 through 1913. Distinguished jurist, effective administrator, but poor politician, William Howard Taft spent four uncomfortable years in the White House. Large, jovial, conscientious, he was caught in the intense battles between Progressives and conservatives, and got scant credit for the achievements of his administration.

Born in 1857, the son of a distinguished judge, he graduated from Yale, and returned to Cincinnati to study and then practice law. While attending Yale, "Big Lub" as he was called, was nominated to be a member of 'Skull and Bones', the most famous secret society in America. His father, and one-time Attorney General, Alphonso Taft, co-founded 'Skull and Bones' as a Yale student in 1832. The rumor is that Yale junior class members are tapped for membership each fall by measure of leadership, influence and breeding. Two other US Presidents (both George Bush) were members of this group as well as many senators, congressmen and business titans.

Taft rose in politics through Republican judiciary appointments, through his own competence and availability, and because, as he once wrote facetiously, he always had his "plate the right side up when offices were falling."

But Taft much preferred law to politics. He was appointed a Federal circuit judge at 34. He aspired to be a member of the Supreme Court, but his wife, Helen Herron Taft, held other ambitions for him.

His route to the White House was via administrative posts. President McKinley sent him to the Philippines in 1900 as chief civil administrator. Sympathetic toward the Filipinos, he improved the economy, built roads and schools, and gave the people at least some participation in government.

President Roosevelt made him Secretary of War, and by 1907 had decided that Taft should be his successor. The Republican Convention nominated him the next year.

Taft disliked the campaign--"one of the most uncomfortable four months of my life." But he pledged his loyalty to the Roosevelt program, popular in the West, while his brother Charles reassured eastern Republicans. William Jennings Bryan, running on the Democratic ticket for a third time, complained that he was having to oppose two candidates, a western progressive Taft and an eastern conservative Taft.

Progressives were pleased with Taft's election. "Roosevelt has cut enough hay," they said; "Taft is the man to put it into the barn." Conservatives were delighted to be rid of Roosevelt--the "mad messiah."

Taft recognized that his techniques would differ from those of his predecessor. Unlike Roosevelt, Taft did not believe in the stretching of Presidential powers. He once commented that Roosevelt "ought more often to have admitted the legal way of reaching the same ends."

Taft alienated many liberal Republicans who later formed the Progressive Party, by defending the Payne-Aldrich Act which unexpectedly continued high tariff rates. A trade agreement with Canada, which Taft pushed through Congress, would have pleased eastern advocates of a low tariff, but the Canadians rejected it. He further antagonized Progressives by upholding his Secretary of the Interior, accused of failing to carry out Roosevelt's conservation policies.

In the angry Progressive onslaught against him, little attention was paid to the fact that his administration initiated 80 antitrust suits and that Congress submitted to the states amendments for a Federal income tax and the direct election of Senators. A postal savings system was established, and the Interstate Commerce Commission was directed to set railroad rates.

In 1912, when the Republicans renominated Taft, Roosevelt bolted the party to lead the Progressives, thus guaranteeing the election of Woodrow Wilson.

Taft, free of the Presidency, served as Professor of Law at Yale until President Harding made him Chief Justice of the United States, a position he held until just before his death in 1930. To Taft, the appointment was his greatest honor; he wrote: "I don't remember that I ever was President." ,

William Howard Taft was born into the powerful Taft family September 15, 1857, near Cincinnati, Ohio as[3] the son of Louisa Torrey and Alphonso Taft. His paternal grandfather was Peter Rawson Taft, a descendant of Robert Taft I, the first Taft in America, who settled in Colonial Massachusetts. Alphonso Taft went to Cincinnati in 1839 to open a law practice,[4] and was a prominent Republican who served as Secretary of War and Attorney General under President Ulysses S. Grant.

After admission to the Ohio bar, Taft was appointed Assistant Prosecutor of Hamilton County, Ohio,[12] based in Cincinnati. In 1882, he was appointed local Collector of Internal Revenue.[13] Taft married his longtime sweetheart, Helen Herron (Nellie), in Cincinnati in 1886.[12]

President William H. Taft loved baseball, just like most everyone else. Baseball is still America's National Pastime! Even though so many younger folks love the action of football and there is the Super Bowl, Baseball still rules because of it's long history in America. President Taft helped with that in 1910, when he started the tradition of 'throwing the first pitch', now a presidential tradition.[1]President Taft was definitely a baseball fanatic. During his four years in office he attended 14 games. One time the game was delayed, "not because of his entrance, but because of the applause!"[2]

President Taft was a 'lover of music'. The Philippine Constabulary Band was formed on October 15, 1902 by Colonel Walter Loving upon the instructions of Governor-General Taft, who was known as a "music lover. The Philippines was famous abroad before the first world war for their 'Philippine Constabulary Band'. The 86-piece band toured the United States to great acclaim, leading the parade in Washington, D.C., to celebrate President Taft's 1909 presidential inauguration. President Taft gets all the credit for establishing such incredible 'band sounds' for the country of the Philippines![3]

WikiTree profile Taft-79 created through the import of Cheney 21 Feb 2012.ged on Feb 21, 2012 by Deborah Mayes. See the [http://www.wikitree.com/index.php?title=Special:NetworkFeed&who=Taft-79. 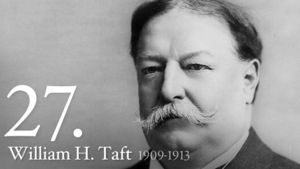 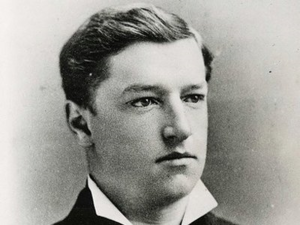 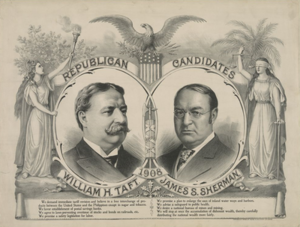 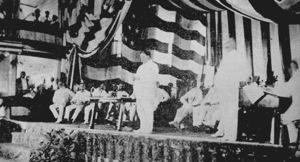 Leave a message for others who see this profile.
There are no comments yet.
Login to post a comment.
Branna Douglas
Apparently I am distantly related to Taft. Through my grandmother's side of the family. Yet, I don't know how we relate quite yet.
posted Jul 28, 2021 by Branna Douglas

Cathryn (Hallett) Hondros
Taft appointed Levi B. Cousins as Doorkeeper of the House of Representatives.

Levi B Cousins, 70 years old, doorkeeper of the House of Representatives has surprised his friends here and in Council Bluffs, Iowa, his home, by taking a bride, who was Miss Jennie Wright also of Council Bluffs. Mrs. Cousins is said to be just half as old aa her husband. The marriage was performed by the Rev. C. M. Eyster at his home, 1824 East Baltimore street, Baltimore. Mr. Cousins is a Grand Army man. He enlisted when he was only 17 and fought with Sherman. He was given his position at the Capitol by President Taft. <See "The Washington Post", (District of Columbia), 1914-Nov-5, page 9, https://www.newspapers.com/clip/45909549/the-washington-post/>

Carole Taylor
As requested I added a 2nd source for his Membership in the Freemasonry.
posted Dec 24, 2017 by Carole Taylor

President Taft was a "lover of music", and established the 86-piece Philippine Constabulary Band. The band led the parade and played at his 1909 Inauguration in Washington, D.C.

Scott Lee
Event of Interest: 14 Apr 1910. The 27th U.S. President, William Howard Taft, begins the tradition of throwing out the baseball on opening day of baseball season. Just a little trivia for our sport's fans.On This Day
posted Sep 26, 2016 by Scott Lee