Children of Philippe Casier and Marie Taine were as follows:

i. Jean Philippe Casier , who was born about 1637 and married Elizabeth Jan Damen Casier

ii. Marie Magdalena Casier Uziele , who was born about 1644 and married David Uziele.

iii. Hester Cassier Belleville, who was born about 1648 and married Jean Belleville.

v. Sarah Cassier Guyon, who was born about 1650 and married Jacques Guyon[1].

Philippe Casier of Calais France, is first mentioned in the Huguenot settlement of Martinique in the French West Indies. In 1635 a party of old and experienced settlers had gone to Martinique from the neighbouring island of St. Christopher, which had been settled by French Huguenots in 1627. Philippe and Marie (Taine) Casier's first two children, Jean and Marie, were born on Martinique. [2][3]

In 1645, Philippe Casier and others left the island and returned to Europe. Casier went first to Calais, then to Sluis, Flanders where his daughter Hester was born. Many French and Walloon exiles from England and from the Dutch seaboard were fleeing to Mannheim, drawn there by assurances of freedom and protection under the government of the Protestant Elector, Charles Lewis who held out strong inducements to the refugees to settle there. [4][5]

Some time after 1652, Philippe and his family moved to Mannheim in the Lower Palatinate of Germany, along with other Huguenots and Walloon Protestants.

Marie and her Philippe Casier sailed for New Neatherland from the Texel in the Netherlands on 27 April 1660 on board the Gilded Otter, and settled at Harlem [6]

Revised History of Harlem (City of New York): Its Origin and Early Annals Published 1904 pg 183. Here can be found the Golden Otter manifest. 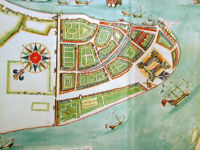 After the death of her husband Philippe Casier, Marie sold the lot in Harlem and moved in New Amsterdam, buying a house on the Mrkvelt-steegie (Market Street) . Her sons Jean and Jacques had a bakery there. Maybe the second bakery in New York. In 1671 she married Jean Le Roy of Harlem. Their marriage record is found in the List of Persons whose banns of matrimony are entered by consent of the Worshipful Mayor of the City, and according to custom, published in the church:

Her brother Isaac Tayne was called Le Pere or The Father, and had emigrated to New Amsterdam some years before Marie's voyage in 1660. Isaac had been made a burgher of New Amsterdam. He wrote his name as Isaac Tayne. On 24 June 1666, Isaac obtained a grant of land at New Castle, Delaware, where he was found living in 1676. He married Sarah Reson.>[8]

Marie is last heard of living on Staten Island in 1677. There were no known children of her marriage to Jean Le Roy.

Sponsored Search by Ancestry.com
DNA
No known carriers of Marie's DNA have taken a DNA test.

Images: 2
The Harlem waterfront as it appeared in 1765. 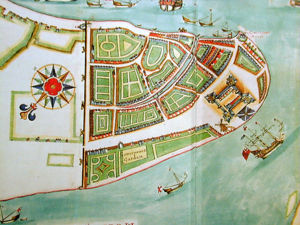