Elizabeth was a Friend (Quaker)

Elizabeth Talbott was born in Anne Arundel County, Province of Maryland, British America about 1656. She is believed to be the only daughter of Richard Talbott and Elizabeth Ewen. Elizabeth was married three times; first to James Preston about 1672. Unfortunately their marriage was brief. James died in Dec 1673 or Jan 1674, leaving a will in which he gave his entire estate to Elizabeth and their infant daughter, Rebecca Preston (b. abt. 1673), equally. He did stipulate that should Rebecca before coming of age or marriage, then her share was to go to his sister Rebecca Preston, and then to his sister Sarah Fford. Elizabeth was his Executrix and proved his will in court on 13 Jan 1673/74.[1]

As her second huband, Elizabeth married about 1676, Benjamin Lawrence, a widower with two children: Benjamin Jr. and Nehemiah Lawrence.[2] By Benjamin, Elizabeth had to children:

Elizabeth was pregnant with their second child when Benjamin wrote his will on 11 Jan 1684/85. Benjamin Jr. was under the age of twenty one and Nehemiah was not mentioned in the will. Elizabeth was sole executrix, and proved his will in court on 3 Jul 1685.[3] 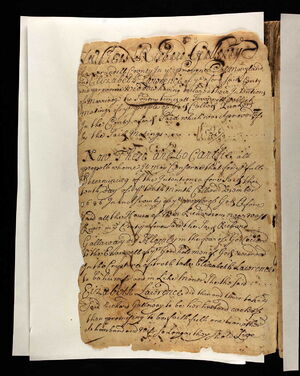