"in the highest ranks of the Anglo-Norman aristocracy, the lords of Tancarville".[1]
The Birth Date is a rough estimate. See the text for details.

The name of Tancarville does not appear until the early twelfth century, first shown in a charter for Henry I in 1103. Among the barons who are mentioned as witnesses is Raoul's son, Earl William de Tancarville.

It seems certain that he is the chamberlain of Duke Robert Courthose and his brother Henry Beauclerc, after his victory at the Battle of Tinchebray (1106). He was a close adviser to King Henry I of England. He was a frequent witness to his actions, and also performed the function of judge. Considered a lord permanently loyal to the king by Orderic Vitalis, he was at his side at the seige of the Chateau d'Eu in 1089. He participated in the Battle of Bremule (1119) alongside the king of England against the king of France during a chance meeting in Vexin.

According to Henry of Huntingdon, it was he who commanded the rebel force that captured Galeran IV Meulan Bourgtheroulde in 1124. However, the Norman chronicler Orderic Vitalis did not mention this in his account of this event.

Guillaume founded the Abbey of Saint-Georges de Boscherville (c. 1112/1113), which replaces the college founded by his father. Through his sponsorship, it attracted a large number of donations, including that of King Henry I who gave him the port of Bénouville.

Boscherville apparently was and continued to be the burial place of the family.

He married Mathilde d'Arques b. 1083 in Arques la Bataille, Normandie, France, heiress of a powerful family, daughter of Guillaume d'Arques and Beatrice Malet.

We know that William was a frequent witness of the crown, but this particular charter is interesting, if only for the somewhat ironic nature.

[10 April—2^ May, A.D. 1121.—Grant to Miles of Gloucester of Sibyl, daughter of Bernard de NeufmarcJie, with all the possessions of her father and of her mother, to wife. [Royal Charters (Duchy of Lancaster), No. 6.] 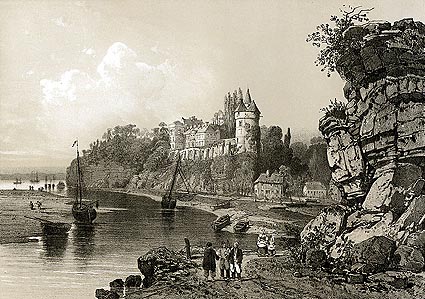 A first castle was founded for a lord named Tancredi who gave his name to the castle fort built on a spur overlooking the Seine to Raoul de Tancarville, Chamberlain of William the Conqueror in the 11th century, of which there remains the square tower; rebuilt in the 12th century, still for the lords of Tancarville ...

Guillaume founded a Benedictine monastery on the old college site that his father Raoul had founded in 1055, with a dozen monks of the abbey of Saint-Evroult-en-Ouche. The construction of a new church, better suited to the monastic liturgy, was begun in 1114. Additionally, construction of monastic buildings were also done at the same time. Several buildings were cleared and coins found confirm an occupation in the twelfth century. (Jens-Christian Moesgaard) (Moesgaard, Jens-Christian; Wasylyszyn, 1995. Nicolas.)

The community of canons settled in the ancient St. George's sanctuary ... A signed Charter of 1080, saved in the municipal library of Rouen, described in an exceptional way for a Norman text of the eleventh century, the original construction. The sanctuary was enlarged westward but mostly eastwards through the development of a short transept and an elongated choir. The church had perhaps the annexes and the canons of common buildings like the cathedral chapters. (Le Maho, Jacques. 1992.).(municipal library of Rouen, Y 52, f ° 54 v °) (Wasylyszyn, Nicolas. 1994). 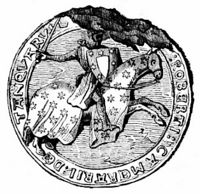 In the eleventh century, it was a stronghold lordship which depended Raoul de Tancarville, guardian of Duke William the Conqueror, future king of England. The fact that Raoul was chamberlain of Normandy, and this function has remained in the family, reinforces a simple corroboration of the hereditary nature of this title. The seal shown here is for Robert de Tancarville le Chamberlain, almost 300 years later.

EDITH-WESTON (St. Mary), a parish, in the union of Oakham, hundred of Martinsley, county of Rutland, 7 miles (W. S. W.) from Stamford; containing 343 inhabitants. Here was a priory of Benedictine monks, a cell to the abbey of St. George, at Banguervill (Boscherville), in Normandy, to which it was given by William de Tankervill, chamberlain to Henry I.

"Henry I granted Beckford to William de Tancarville. During William's lifetime it was held by his son Ravel the chamberlain, who claimed to hold not at farm but freely in demesne. When c. 1128 Ravel granted Beckford to the canons of Ste. Barbe-en-Auge, the king after some delay confirmed the grant in free alms. Ste. Barbe's right to the manor was subsequently disputed. During the Anarchy William de Beauchamp, who claimed Beckford 'in time of war . . . by hereditary right', twice evicted the canons from Beckford. After papal intervention William de Beauchamp was forced to make restitution of damages and later released all claim to the manor. Under Henry II the yearly farm of £30 was claimed from Beckford manor because, as the canons alleged, at the time of the grant to William the chamberlain the king's roll had been negligently left unaltered. The claim apparently lapsed, for from 1158 the sheriff deducted the £30 from the farm of the county, and before 1162 the king confirmed Beckford to Ste. Barbe in free alms. The sheriff's deduction was challenged on the grounds that the £30 had never been part of the farm, and not until 1179 was it allowed. Between 1185 and 1189 Henry II again confirmed Ravel's grant of Beckford to Ste. Barbe." (Ref: British History Online)

"Avebury was one of two English cells of the Benedictine Abbey of St. Georges de Boscherville near Rouen (Seine Inférieure), the other one being at Edith Weston in Rutland. Lands at Avebury, Winterbourne near Salisbury (perhaps Winterbourne Dauntsey), and Barbury in Wroughton, with a rent in Catcomb, in Hilmarton, were given to the Abbey by William de Tancarville in 1114, and a priory was established at Avebury soon afterwards." (Ref: British History Online)

By 1212 the hundred comprised the Tancarville fee of Bruton, Honeywick (in Pitcombe), Milton (Clevedon), Pitcombe with Cole, Redlynch, Witham, and Yarlington.[3] In 1225 Discove, Woolston (in North Cadbury), and the vill of West Bruton were named in addition.[4]

Bruton hundred was presumably a Crown possession as part of the royal estate of Bruton in 1066 and 1086.[5] Before 1133 it had passed as part of a fee either to William de Tancarville I (d. 1129) or to his son Rabel (d. 1140), hereditary chamberlains of England and Normandy.[6] William de Tancarville II succeeded his father Rable as lord in Bruton and was still alive in 1177.[7] William was followed by his son Ralph,[8] but thereafter the family ceased to have an interest.

Between 1135 and 1154 Alexander de Cauntelo, a principal tenant on the Tancarville fee, granted the hundred, with the market and other land, to the new priory at Bruton in return for a fee farm of 2 marks.[9] The fee farm was transferred to the Crown on the forfeiture of the Cauntelo interest between 1199 and 1208.[10]