This profile is part of the Templeton Name Study.

Robert Templeton Senior was born circa 1728[1] and could have been born in County Antrim, Ireland. Note: Per family records Robert's youngest child John (and by John's own testimony) was born in Ireland. Also, the DAR record for his son, Robert Junior, has Robert Junior born in Ireland. Robert passed away between December 1788 and March 1794.

Robert Templeton Senior arrived in the Carolina colony from County Antrim, Ireland, prior to 1772. He was the patriarch of a family unit consisting of his wife (name unknown), sons Robert Junior, John, and James, and daughters Agnes and Martha. This is based on the following for land grants issued to Robert, James, Agnes and Martha, plus verification there was an elder Robert. (Charles Town, South Carolina, publication code:7343 where the Primary Immigrant is listed as: Templeton, Robert. Annotation: From the Journals of the Council of the Colony of South Carolina. Names and land allotments under the Bounty Act of 1761.[2])

Per the South Carolina Council meeting on 8 November 1772, seventy-three passengers arrived from Ireland who petitioned for land and were awarded a bounty. Their prayer was "that they were Protestants who had come from Ireland with their families and desired to settle and cultivate lands in this new country." However, more than 73 passengers were aboard the ship. Taking into account how the acreage was awarded there were close to 200 passengers. (For the possible name of the ship they arrived on see immigration below.) Among the passengers were Robert, James, Agnes and Martha Templeton. At the time the going rate for grants was 100 acres for each individual over 16, and an additional 50 acres for each member of a household. Robert was granted 250 acres which meant his immediate family consisted of himself, his wife, and sons Robert Junior and John. Agnes, Martha and James were granted 100 acres each meaning they were over 16 but not married. 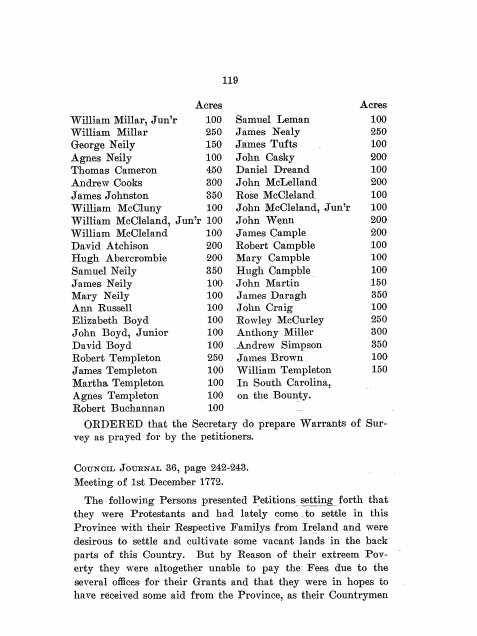 A court action of 8 November 1772 "ordered that the Secretary to prepare Warrants of Survey as prayed for by the petitioners." Robert, Agnes, James and Martha received certified surveys on or about 15 December 1772.

On page 120 of Laurens County SC Court Minutes 1786-1789 by Brent Holcomb, there is a "Rob't Templeton Jun'r" serving as a petit juror. This was recorded for 8 December 1788. Since there was a Robert Junior there must have been a Robert Senior. On page 9 of Laurens County SC Wills 1784-1840 by Colleen Elliot there is the following: "8 Mar 1794 Appraisal of estate of Robert Templeton dec'd by Robt. Hanna, James Adair & Thomas Logan."

We now have a Y-37 tester from Robert Templeton, Sr.'s line who matches others of this David's line. Please see, Wayne Templeton and contact Mags Gaulden for any information regarding Wayne's test information.

The name of Robert's wife is not known. Some have suggested her name was Mary but have been confused by L. B. Templeton's book on the Laurens County Templetons. L. B. misinterpreted the Robert Templetons who came over in 1772. He assumed there was only one Robert whom he referred to as Robert Senior. Actually, his Robert Senior was Robert Junior as there were two Robert Templetons who were father and son. It was the son (Robert Junior) who married a Mary (Mary Hanna) and later moved to Indiana."

This profile is a collaborative work-in-progress. Can you contribute information or sources? Any changes or additions to this profile should be discussed on G2G, using the tag, southern_colonies, in accordance with the Project Protected Status.

ask our community of genealogists a question.
Sponsored Search by Ancestry.com
DNA Connections
It may be possible to confirm family relationships with Robert by comparing test results with other carriers of his Y-chromosome or his mother's mitochondrial DNA. Y-chromosome DNA test-takers in his direct paternal line on WikiTree: It is likely that these autosomal DNA test-takers will share some percentage of DNA with Robert: 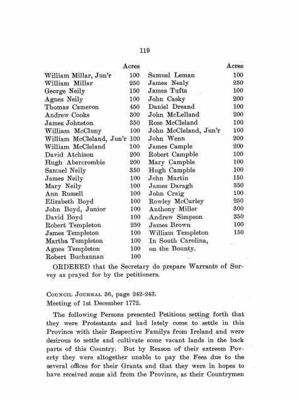 Leave a message for others who see this profile.
There are no comments yet.
Login to post a comment.
[Living Templeton]
Left on Leslie's profile:

Leslie, Thanks for the comment on Robert Templeton's wife. The SC records do not mention Robert's wife either by name or birth/death. His wife would have to have been born in Ireland, based on statements by Robert's son John who was born in Ireland. As Mags stated in her comment, I would like to see the documented proof Robert's wife was named Mary or Jeanette. Regards, Ron

Hey Leslie and Welcome to WikiTree!

Thanks very much for the note!

Mags Gaulden
Thank you Mary Richardson, from the southern Colonies Project for working on sourcing and information on the profile! Mags
posted Nov 26, 2014 by Mags Gaulden

Mags Gaulden
The two Agnes' as daughters on this profile do not match. Which one is the correct one and where does the wrong Agnes (for this Parent) fit in? Mags
posted Nov 24, 2014 by Mags Gaulden