"very peculiar looking, tall, dark, with a fine head, long black flowing hair & a beard, oddly dressed, but there is no affectation about him." Queen Victoria on meeting him for the first time in 1862[1].

Opening Stanza from The Charge of the Light Brigade. Published in 1854.

Alfred Tennyson was born 6 August 1809 and christened two days later in Somersby, Lincolnshire[2] where his father was the rector. He was the son of George and Elizabeth Tennyson. He was their fourth child (and fourth son).

Another eight siblings were born after Alfred. While never a well-to-do family, George managed money well and carefully educated his children. His older sons, including Alfred, were writing poetry in their teens.

In 1827[3], Alfred went up to Cambridge to attend Trinity College. While there he met his best friends: Arthur Hallam and William Henry Brookfield. In 1829, his poem "Timbuktu" was awarded the Chancellor's gold medal, Cambridge's highest award for poetry. In 1830, aged just 21, his first book of poetry was published, Poems Chiefly Lyrical; some thought it overly sentimental, but it sold well and brought him to public notice.

Tragically his father died in March 1831 and Alfred never completed his degree, returning to Somersby to be with his family. The family were allowed, by the new rector, to remain at Somersby Rectory for six years after the death of their father.

In 1832, Alfred published his second volume of work, Poems. It included the first version of one of the defining poems of the Victorian age, "The Lady of Shallot". The poem was painted by a dozen famous painters, endlessly referred to in other literary works and set to music by Messiaen and Sir Arthur Bliss.

Out flew the web and floated wide—
The mirror crack'd from side to side;
"The curse is come upon me," cried
The Lady of Shalott.

However the volume was harshly received and Alfred did not publish further for ten years, though he continued to write.

In 1841[4], Alfred was listed as living in Grove Hill, Tunbridge Wells, Kent, with his mother, his four younger sisters and three servants. There was no profession listed beside his entry.

In 1842, Alfred published again, this time a double volume of Poems, the first were works previously published, the second new works. It was an immediate and huge success and his reputation was set forever.

In 1847, he published The Princess: A Medley, a satire on female education, which later was the source for Gilbert & Sullivan's Princess Ida.

In 1850, Alfred published his masterwork: In Memoriam AHH, dedicated to his best friend, Arthur Hallam, who had died of a stroke in 1833. It is a masterpiece of flowing lyrical English poetry. After Albert's death it became one of Queen Victoria's favourite books as she told him on meeting him for the second time.

With Alfred's fortune and reputation finally secure he at last married Emily Sellwood, whom he had known since childhood[5]. He was 40 and she nearly 37. They married in Shiplake, Oxfordshire where one of her relatives was the vicar.

Earlier that year, in April, William Wordsworth had died at the age of 80. He had been Poet Laureate for seven years and had not written a verse in that time. In November of the same year, Tennyson was offered the post and accepted. He would hold the position for the next 42 years, the longest ever serving poet laureate. Unlike his predecessor, he wrote for most public occasions, some pieces are excellent, others uninspired.

In 1851[6], Alfred and Emily were living at Chapel House, 15 Montpelier Row in Twickenham. With them were her father, Henry Sellwood, and a servant. Alfred's profession was listed as 'Poet Laureate', presumably the only person with that job in the Kingdom.

Alfred and Emily's first child, Hallam, was born there in Aug 1852. In 1853, they began to rent Farringford House, near Freshwater on the Isle of Wight, later buying the house in 1856. It was there that their second, Lionel, was born in March 1854. These sons were their only children.

However at times the numbers of sightseers and well wishers at Freshwater became too great and they also bought Aldworth House on the South Downs in Sussex. The family moved between the houses at their convenience.

In 1861[7], the family was listed at Farringford; Alfred and Elizabeth, Hallam and Lionel, a visitor, a tutor and seven servants.

In both 1865 and 1868 he was offered a peerage by Disraeli but in both cases he turned it down.

In 1871[8], the family was still at Farringford except for Hallam who was following in his father's footsteps at Trinity College, Cambridge. Alfred was listed as Poet Laureate & Landowner and there were two visitors and three servants in the house with them.

In 1881[9], the family was living a 9 Upper Belgrave St, Belgravia. This time it was Hallam who was at home with his parents, listed as Landowner in the register. There was one young visitor, and nine servants.

In 1883, Gladstone once again offered him a peerage. Thinking of the legacy to his son, Alfred accepted. Queen Victoria duly made him Baron Tennyson, of Aldworth in the County of Sussex and of Freshwater in the Isle of Wight; he took his seat in the House of Lords on 11 March 1884. He was the first British writer to be ennobled.

In 1891[10], they were once again at Farringford. With Alfred and Emily (now listed as Peer and Peeress of the Realm) were their son Hallam (listed as a JP for Hampshire), his wife, and their baby son. Among the nine servants were two nurses and a nursemaid. Clearly his Lordship's health was beginning to fail at the age of 81.

On 12 October there was a large public funeral with huge crowds[11] as he was interred in Westminster Abbey under a simple gravestone in Poets' Corner[12]. There are a number of other memorials to him, the best known being in Trinity College Chapel in Cambridge and on Tennyson Down near his home at Farringford.

Dear as remembered kisses after death,
And sweet as those by hopeless fancy feign'd
On lips that are for others; deep as love,
Deep as first love, and wild with all regret;
O Death in Life, the days that are no more. 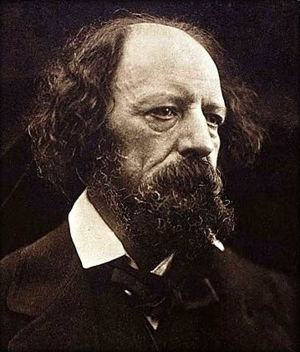 The Rectory at Somersby by W.E.F. Britten 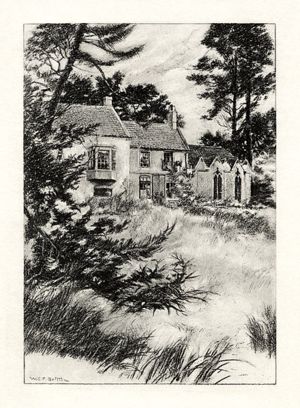 Alfred and his family 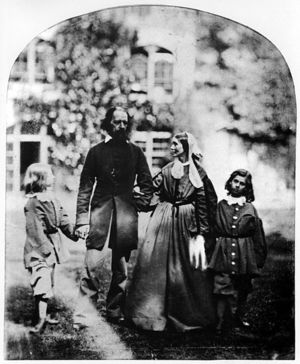 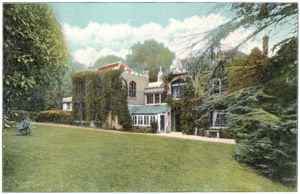 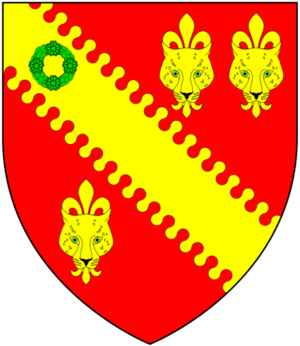