It is frequently seen that Roger Terrill (Terrell, Tyrrell) is directly descended from Sir Walter Tyrrell compatriot of William the Conqueror. There is no documentation of this nor is there definitive documentation of his parents. He has been detached from claimed (without sources) father Roger Terrill.

It is known that Roger Terrill came from England to the colonies about 1637 with a company from London under Eaton and Davenport and became one of the original settlers of Milford, Connecticut by 1639.[1] Milford is located on the inner coast of Long Island Sound where the Wepowaug River flows into the harbor. In 1639 there were approximately 200 settlers in Milford. By 1645 most of the settlement consisted of frame houses and was surrounded with palisades twelve feet high enclosing a square mile. In 1646 the native inhabitants tried to burn down the town after which the planters did not leave the palisade except in armed groups.

The Milford settlers were mostly from Essex, Hertfordshire and York counties in England. Savage states that Roger Terrill was from Nazeing in Essex but without documentation for the statement. By November 1644 he married Abigail Ufford (or Ulford), daughter of Thomas and Isabel Ufford, who came from England on the ship "Lyon" in 1632, locating first at Roxbury, Massachusetts, and finally in Milford.[2][3] He joined the First Church (Milford) on 28 July 1644.[4]

The Terrill's original home lot is described in the Records of 1646: "Roger Terrill hath two acres three roods and twenty poles be it more or less being bounded with a high way to the west, Phillip Hatley on the north with other lotts to the east and Sergeant Camp to the south." Many other acres of land were allotted to Roger for pasture, agriculture and possibly commerce as one of his grants of land abuts the "Comon" on the north and west. Roger Terrill appears to present a classic case of the pasture is always greener on the other side for in 1646 he evidently had taken over land claimed by another and was duly reprimanded: "General Court at Milford December 24th 1646 decreed that Roger Terrell is to give back again, that land which is in his possession, which was laid out for Philip Hatley." Notice the "give back again"... Philip Hatley was Roger's neighbor to the north, and evidently he found Hatley's land greener. Philip Hatley left town in 1649.

In his lifetime Roger accumulated considerable wealth for the time. He also held some standing within the community as evidenced when his father-in-law Thomas Ufford appointed him to represent his son, John, in an issue before the Court at New Haven in 1657. John Ufford had gotten himself into a complicated situation by obtaining a rarely granted divorce on a claim of impotence, only to then be charged with fornication with his father's servant, Martha Nettleton, when she turned up pregnant. John was allowed to marry Martha, although the Court was miffed at being misled in the matter of his first marriage and subsequent divorce, and his conduct after. Considering the punishments such behavior usually received, Roger must have been quite eloquent before the magistrates or held considerable sway.

Cutter, William Richard: His entry in Vol I:513 confuses many. The entry appears to be about the son Roger yet includes some facts from the father's life. 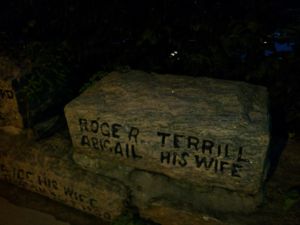 Rick Pierpont
There is a broken link for the source called "The Descendants of Roger Terrill of Milford, Connecticut". The domain https://dor-terrill.net/ says this is temporary. There is no date on the message, so I can't tell if this is a recent change or if it will ever come back.
posted Feb 03, 2021 by Rick Pierpont

Anne B
I think we can live with the error a little longer or remove the link. We know as of today it doesn't work.

I've moved it out here so if you want to clear the error we still have the link, which of course won't work with their new system anyway.

T Stanton
As part of the rewrite and resourcing of this profile, propose that the father be detached. There does not appear to be any primary source documentation that the father of Roger Terrill is known or recorded. Savage claims he is from Nazeing, Essex while others claim Middlesex. All absent docs. The current sections regarding Sir Walter Tyrrell have no real connection to Roger Terrill...only 600 years of lineage is absent.
posted Mar 12, 2019 by T Stanton

Anne B
Terrell-880 and Terrill-6 appear to represent the same person because: Merge into Terrill-6
posted Jul 30, 2017 by Anne B