Dorothy Celene Thompson (9 July 1893 – 30 January 1961) was an American journalist and radio broadcaster, who in 1939 was recognized by Time magazine as the second most influential woman in America next to Eleanor Roosevelt. She is notable as the first American journalist to be expelled from Nazi Germany in 1934 and as one of the few women news commentators on radio during the 1930s. She is regarded by some as the "First Lady of American Journalism."

Dorothy Thompson was born in Lancaster, New York, in 1893, one of three children of Peter and Margaret (Grierson) Thompson. Her siblings were Peter Willard Thompson and Margaret Thompson (later Mrs. Howard Wilson).

She was married three times:

Thompson died 1961, aged 67, in Lisbon, Portugal and is buried in the Town cemetery, Barnard, Vermont

Outspoken and ambitious, Dorothy Thompson became a well-known journalist during the 1930s to 1950s. Thompson was born July 9, 1893 in Lancaster. She spent her early childhood here, but was sent to live with family in Chicago When she was 15. She was known as a trailblazer in her field sometimes referred to the First Lady of American Journalism. Her syndicated column, On the Record, reached millions. Her most memorable interview was with Adolph Hitler in 1931. "In something less than 50 seconds I was convinced that I was meeting the future dictator of Germany," she wrote, "It took about that time to measure the startling insignificance of this man who has set the World agog. He is the very prototype of the Little Man."(1)

She was married three times, most famously to second husband and Nobel Prize in literature winner Sinclair Lewis. In 1923 she married her first husband, Hungarian Joseph Bard; they divorced in 1927. Thompson married Lewis in 1928 and acquired a house in Vermont. They had one son, Michael Lewis, born in 1930. The couple divorced in 1942.[2] She married her third husband, the artist Maxim Kopf, in 1945, and they were married until Kopf's death in 1958. 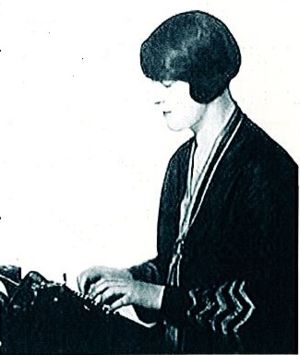