In 1638 Richard and Jane sailed on the John of London from Hull as one of the families who were followers of Rev. Ezekiel Rogers who settled Rowley, Massachusetts.

In 1643 Richard had a two acre lot in Rowley. Richard and Jane sold their Rowley property in 1651 to Capt. John Johnson and moved to Newbury and lived north of the Parker River in the area of Dummer Academy. On 1 Dec.1651 Matthew and Sarah Chaffey of Boston sold to Richard for £155 a 400 acre farm in Newbury bounded by Carb Creek. He had a grant of land over the Newbury River in 1653 and built a bridge over the river and the General Court fixed a toll rate for animals only on 3 May 1654. On 27 Jan.1669 Richard and Jane gave part of their farm to their son Thomas, to fall to his son Francis in case Thomas died.[1]

Emigrated from England in 1639 and was one of the first settlers of Rowley, Massachusetts. Death record in Newbury Vital Records. Marriage record in Torrey.

The first settlers of Rowley were a group of twenty families from Rowley, England, near Hull in Yorkshire who came in the company of their Rector, Mr. Rogers. They arrived in America in 1638 and wintered over, possibly in Boston, before joining with sixty other families to settle Rowley, Massachusetts. Whether Richard Tharley was in the group from Rowley, or among the additional immigrants we do not know, but he settled in Rowley in 1639.

According to Richardson, The Tenney Family of...Rowley, MA., Register, 151, pp.329-341, most of the original settlers of Rowley came from Rowley, Yorkshire. This has been difficult to prove since the parish registers of Rowley, Yorks, have not survived. However the Bishop's transcripts for the same period are now available on microfilm through the Family History Library in Salt Lake City (FHL microfilm 919,436, including 1605, 1607, 1620-1624, 1630-1640). This is an avenue worth pursuing for the origins of Richard Tharley.

“ To Richard Thorlay, one house lott containinge two acrees, bounded on the west side by Mr. Edward Carleton’s house lott, and the south end by the streete." page 128, Holmes Streete, [Rowley, MA] 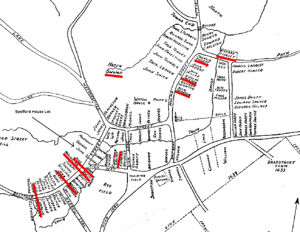