Sam Blowsnake recorded "Thunderbird," as we might suspect, as a Thunderbird Clan name. (Blowsnake) His name was Wakąjága, from Wakąjá, "Thunderbird"; and -ga, a definite article suffix used in personal names.

He is mentioned in connection with the large warparty led by Dog Head. Thunderbird as the brother-in-law of Big Sand, the brother of Black Otter. In an attack on a Missouria village, Black Otter captured two children, a boy and a girl. Thunderbird took the girl away, then came back and tried to take the boy, but Black Otter would not give him up. Black Otter was the first to take a captive to the Warleader, Dog Head (Little Duck), and thereby won the First War Honor.

In 1828 he was a member of the Winnebago Delegation to Washington, D. C., where he was painted by George Caitlin.

Is Wakąjága your ancestor? Please don't go away!

ask our community of genealogists a question.
Sponsored Search by Ancestry.com
DNA
No known carriers of Wakąjága's ancestors' DNA have taken a DNA test. 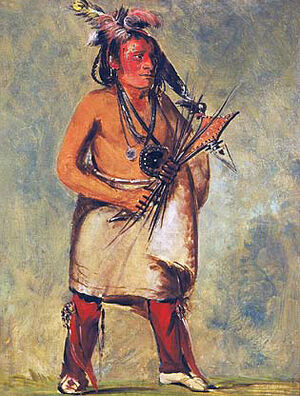