He married Lydia Huckstep on 13 Oct 1606 in Benenden, Kent, England. All twelve of their children were born in Kent. The family emigrated together on the Hercules of Dover in March 1634-35 with seven servants.

Some believe that Nathaniel Tilden preceded his family in coming to America, citing deed of sale of land dated 1628.[3][4] But no such record is found and a passenger list of the Hercules of Dover exists (or is claimed to exist) that lists Nathaniel, seven children, seven servants and Lydia his wife. And there are no records of him in New England before 1634.

They settled at Scituate (from Indian meaning "cold brook") which had been founded by Timothy Hatherly, who later married Nathaniel's widow Lydia. He died probably in Scituate between 25 May and 31 July 1641 and was buried at the Cemetery of the Men of Kent, Scituate, Plymouth Massachusetts.[citation needed] There is a tall granite monument there dedicated to the Men of Kent and bears the names of the eleven original settlers of Scituate including Nathaniel Tilden and Timothy Hatherly.

His wife Lydia died at Scituate, Massachusetts, on 31 Jul 1672. The Tilden's were Puritans but some early records indicate they were considered renegades.

The Seven Servants of Nathaniel Tilden

Arriving in 1634 on the ship Hercules of Dover with the Tilden family were the following servants:

Savage and others proposed that Nathaniel's wife of Lydia, perhaps daughter of Thomas Bourne,[6] based on the reference to the "son Tilden" in Thomas Bourne's 1664 will.[7] Problems with this include:

That the wife Lydia was the mother of all of Nathaniel Tilden's children is proved by the bequest in Joseph Tilden's will: "to my sister Lydia Tilden, late wife of my brother Nathaniel Tilden...and to her two daughters who are married in New England."[8] These daughters were born in 1610 and 1613.

Last Will & Testament of Nathniel Tilden of Scituate[11]

Men of Kent Cemetery, Scituate, Plymouth, Massachusetts. His obviously more modern tombstone has listed the date of his inventory as his death date.[12]

Sir Richard de Tylden was Seneschal to Hugh de Lacy, Constable of Chester, during the reign of Henry II of England ca 1153-1189, Richard is said to have accompanied King Richard I (Cour de Lion) on crusade to Palestine. His son was probably:

Sir Richard of Sittenbourne who m Gertrude dau of Sir Wm Vernon of Fordsham, Cheshire. They had:

Sir Henry m Phillipa dau of Sir Richard Boteler of Lancashire; they had

Sir Wm. m Constance dau of Rodolphus Gannett and had:

Sir Wm Tylden who served under the Black Prince in the Battle of Poitiers in 1366. Sir Wm married Angharad, daughter of Sir Matthew Ellis of Cheshire and had:

Richard Tylden m Eliz.dau of John Toke. They had

Richard who m Eliz Osborne in 1210 and had Manby, Wm., and Richard Osborn. [This makes no sense; someone m in 1210 would have been born about 1185, so could not possibly be this many generations down from someone born in the same century.

The Tildens of America can trace their lineage back by authentic records to John Tilden, an influential clothier of Benenden, who was born about the year 1400. He was the direct progenitor of Nathaniel Tilden...

<-- Please edit, add, or delete anything in this text, including this note. Be bold and experiment! If you make a mistake you can always see the previous version of the text on the Changes page. --> 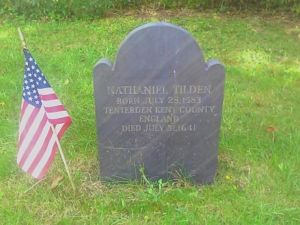 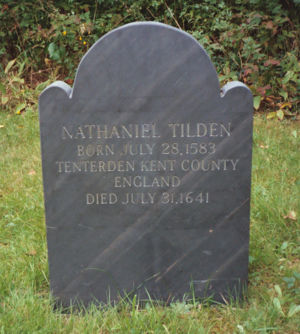 calls the ship the Hercules of Sandwich.

Mindy Silva
I agree with Anne. I believe the death date should be set as 'before' the inventory date of 31 July 1641
posted Feb 28, 2018 by Mindy Silva

Anne B
I think we should be using either after the date of the will or before the date of the inventory (my preference). The date currently being used is neither, and seems to be a conglomeration.
posted Feb 28, 2018 by Anne B

Jillaine Smith
The stone was not engraved at the time of his death; the stone looks far newer.
posted Feb 26, 2018 by Jillaine Smith

Beryl Meehan
The stone is engraved with death date.