There is a Great Migration Article on Robert GM:2:7:63-67. Profile needs further cleaning and neatening etc.

It seems that much of the erroneous information for Robert Titus is based on one of the main verifiable documents for him. The ship manifest for the Hopewell that disembarked in April 1635 from London. I have seen numerous summaries and interpretations for the manifest but here is a link to what purports to be and appears to be a transcription of the original manifest - Hopewell Manifest. (Thanks to Laura Freeman and Olive Tree Genealogy).

For 3 April 1635 we see this information for Robert and his family:

This is all the information we have to work from for the manifest.

First issue, who was Robert's father? The supposition that Silas Titus, SR was Robert's father is largely based on Robert being from Hertfordshire. There is nothing in the information above to indicate he was. There were three St. Katherins (St. Catherine's) at the time near where the ship departed from including one near the tower of London, however I have found no reference to a St. Katherins (St. Catherine's) in Hertfordshire. I believe this potentially erroneous association with Hertfordshire stems from a previous entry in the manifest on this day. Two entries prior to Robert's is a group from Stanstead Abbey (not a real place, likely Stanstead Abbot) in Hertfordshire. It seems people through one means or another have associated all the people who boarded on April the 3rd with Hertfordshire as it is the first location that is noted on that day, even though there is a group from Essex listed between Robert's family and the Hertfordshire group. So unless someone can show evidence that Robert was from Hertfordshire I do not see how he can be associated with Silas Sr. It seems that Silas Sr had a son who went to America around the same time as Robert but several histories I have seen put a question mark next to Robert names as if they are not sure this is even the name of Silas' eldest son. (Honestly when I go back to the source documents for the family histories I find mention of Silas being the father to Silas Jr but no mention of Robert at all.) To claim they are family is based only on conjecture as there is not enough - that has been presented - available information to support it. It may be true but it is much more likely it is not the case.

Third issue, what was Robert's wife's maiden name? Again one of the errors with her last name clearly comes from the manifest as you find her last name listed as Uxor or Uxar. Uxor means wife in Latin, and that is what the manifest above is indicating is the relationship between Robert and Hannah - not her maiden name. I also see Carter listed as a maiden name. The potential for this to be true is based on whether Robert was from Hertfordshire, which brings us back to argument in the first issue. It is possible Carter is Hannah's last name but personally I do not think the evidence so far available supports making that claim as there is nothing tying Robert to Hertfordshire.

Robert, his wife Hannah, and their two sons John and Edmond departed London, England on April 3, 1635 on the Hopewell for Boston, Massachusetts. The arrived few weeks later and were granted land in Brookline, Massachusetts.

After two or three years they moved to Weymouth, Massachusetts. In September 1622 they moved with Rev. Samuel Newman to the town of Rehoboth, Rhode Island.

He had trouble with the authorities because he was wiling to harbor Quakers. He then moved around March 1654 to Long Island, New York. [1]

FamilySearch.org provides a christening in Stanstead Abbey, Hertfordshire, England. Ancestral File Number: 46H7-VJ. (Note: This information is incorrect as there is no place called Stanstead Abbey in Hertfordshire. It is a mistake found in the attached Titus History and associated with the information provided with their trip on the Hopewell. Usually the Stanstead Abbey note is associated with St. Katherine's. St. Katherine's is most likely the one found in London near where the Hopewell departed.[3]

London 3d April, 1635.[4]
" Theis underwritten names are to be transported to New England imbarqued in ye Hopewell, Mr. Wm. Bundick. the pties have brought certificate from the Minister & Justices of peace that they are no Subsedy men. they have taken the oath of alleg: & Supremacie." Among the thirty names are some from Essex, some from Derbyshire, Hertfordshire and Cambridge.

Note: Olive tree genealogy Ships lists has probably made a typo in their list making Hanna 21 instead of 31. If her age were 21, we would have to conclude she was a second wife since she would only have been 13 when Jo: was born.

Was a soapmaker [5] Was a husbandman as recorded on ship's passenger list. [6]

Note: From website: http://www.2fools.net/book-0001/0023-0002.html#CHILD2 - The New England Historical and Genealogical Register, Vol. 132, 1978 states: "The marriage on 24 June 1624 of Robert Titus and Anne Carter, recorded in the parish register of Watford may refer to the Robert and Hannah Carter of 'St. Katherines' who immigrated in the Hopewell.... Carter was very common in the sixteenth and seventeenth century Watford district and were the English kin of President Carter." Robert, Hannah and their two children, John (age 8) and Edmond (age 5), sailed from London on April 3rd, 1635 on board the Hopewell. Settled at Brookline, MA, moved to Weymouth, MA, Rehoboth, MA, then to Huntington, Nassau Co., NY. (near Cold Spring Harbor), in 1654.

Note: From website: http://www.2fools.net/book-0001/0023-0002.html#CHILD2 - The New England Historical and Genealogical Register, Vol. 132, 1978 states: "The marriage on 24 June 1624 of Robert Titus and Anne Carter, recorded in the parish register of Watford may refer to the Robert and Hannah Carter of 'St. Katherines' who immigrated in the Hopewell.... Carter was very common in the sixteenth and seventeenth century Watford district and were the English kin of President Carter." Robert, Hannah and their two children, John (age 8) and Edmond (age 5), sailed from London on April 3rd, 1635 on board the Hopewell. Settled at Brookline, MA, moved to Weymouth, MA, Rehoboth, MA, then to Huntington, Nassau Co., NY. (near Cold Spring Harbor), in 1654.

Images: 2
The Titus Family in America 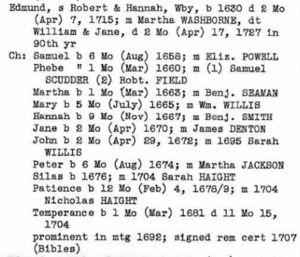 Since this is a project protected profile in the Puritan Great Migration project, the above link to Great Migration needs to be followed to obtain possible answers regarding the "Known Issues."

London 3d April, 1635. The passenger list, preserved in the public record office, London, contains the following entry': " Theis underwritten names are to be transported to New England imbarqued in ye Hopewell, Mr. Wm. Bundle. The parties have brought certificate from the Minister and Justices of the Peace that they are no Subsidy men, they have taken the oath Alleg. and Supremacie." Here follow between twenty and thirty names, some from Essex, some from Derbyshire, Herts and Cambridge. Among them are these names: Robert Titus, Husbandman of St. Katherines, aged 35 ; Hannah Titus, Uxor, age 31; Jo Titus, age 8; Edmond Titus, age 5. http://williamgreenhouse.org/documents/books/revjohnmooreofnewton.pdf

posted Jul 21, 2018 by Beryl Meehan
S Fagley
Thanks Brian for your insight diligence and resolve in working towards the accuracy of this profile. Robert is multiple generations removed from where I am actively researching and I can't defend the accuracy of the Titus profiles I worked on this far back. I welcome the insight of the contributors working on these profiles. In hindsight the merge probably should have been set as an unmerged match. Wikitree does not let you put multiple mothers/fathers. I was looking into this sometime back as a way of handling adoptions. The unmerged match appears to be the best way of handling this without those features available. Ideas?
posted Nov 15, 2013 by S Fagley
[Living Chelton]
Tried to fix this but just seemed to make it worse. So here is the information that was lost: The following two women may or may not be the mother of Robert Titus. Without evidence one of them was removed from the profile. Here are the two profiles in question. Jane Newdyke (Newdyke-1) and Constance Colly (Colly-10). If someone knows how to restore both of them to being "mother" until it is determined which one - if either of them - is Robert's mother that would be good for the retention of the information.
posted Nov 13, 2013 by [Living Chelton]

Jay Byrne Jr.
Brian - thanks for your diligence and contributions. I've not had time to review them in detail as they are not linked directly to my tree. My view is that any additions, with appropriate references or reservations noted, should be welcomed. As for deletions, neither of these profiles come from my research - you might want to (if you haven't already) reach out to those article owners on their pages directly (Fred Goodell and Sara Feder)to let them know of the proposed change.
posted Nov 06, 2013 by Jay Byrne Jr.
[Living Chelton]
It has been three weeks since my previous comments. Does anyone have any feedback or more importantly any information to support Silas as being Robert's father? I will give it a little more time but since there seems to be no objections or defense of the current profile, when I get a chance I will disconnect Silas and Jane from this profile and note why they were "removed" as parents. Please let me know if you have any information so we can move forward with this profile.
posted Nov 06, 2013 by [Living Chelton]
[Living Chelton]
summarized everything I know/could find under the "Known Issues" section. Please provide feedback, sources, suggestions on how to proceed, etc.
posted Oct 15, 2013 by [Living Chelton]
[Living Chelton]
represent sourcable information, but at the very least it needs to called out clearly what assumptions or questions there are for the data presented so these errors do not continue to be propagated. I stopped working on this line a while ago because I could not reconcile the information moving backwards from Robert and did not want to initiate any more "bad" merges than had already happened.
posted Oct 15, 2013 by [Living Chelton]