Trajan is remembered as a successful soldier-emperor who presided over the greatest military expansion in Roman history, leading the empire to attain its maximum territorial extent by the time of his death. He is also known for his philanthropic rule, overseeing extensive public building programs and implementing social welfare policies, which earned him his enduring reputation as the second of the Five Good Emperors who presided over an era of peace and prosperity in the Mediterranean world.

His full name from birth to his adoption was Marcus Ulpius Traianus. His regnal name, from adoption to accession, was Caesar Marcus Ulpius As emperor, his name was Imperator Caesar Nerva Traianus Divi Nervae filius Augustus[1]

He was born 18 September 53 in Italica, Hispania Baetica, (now located in the Province of Seville, Andalusia, Spain) [1]

His father was Marcus I Ulpius Traianus (b. abt. 30 AD)[2] [3] Some believe that, "Trajan senior was actually a Traius who was adopted into the family of the Ulpii." [3] Trajan was adopted by Nerva. [3]

His mother was named Marcia. [3]

He had a sister named Ulpia Marciana, who was born in the year 48. [3]

He was of the dynasty Nerva-Antonine and the Gens: Ulpii[1]

Trajan was born in the city of Italica (close to modern Sevilla), an Italic settlement in the province of Hispania Baetica. Although misleadingly designated by some later writers as a provincial, his family came from Umbria and he was born a Roman citizen.[3]

He married Pompeia Plotina. There were no issue from this marriage. [1]

Trajan rose to prominence during the reign of emperor Domitian. Serving as a legatus legionis in Hispania Tarraconensis, in 89 Trajan supported Domitian against a revolt on the Rhine led by Antonius Saturninus.

In September 96, Domitian was succeeded by Marcus Cocceius Nerva, an old and childless senator who proved to be unpopular with the army. After a brief and tumultuous year in power, culminating in a revolt by members of the Praetorian Guard, Nerva was compelled to adopt the more popular Trajan as his heir and successor. He died on 27 January 98 and was succeeded by his adopted son without incident.

Trajan reigned from 27 January 98 to 8 August 117. He was preceded by Nerva, his adoptive father, and followed by Hadrian.

Early in his reign, he annexed the Nabataean Kingdom, creating the province of Arabia Petraea.

His conquest of Dacia enriched the empire greatly, as the new province possessed many valuable gold mines.

Trajan's war against the Parthian Empire ended with the sack of the capital Ctesiphon and the annexation of Armenia and Mesopotamia.

His campaigns expanded the Roman Empire to its greatest territorial extent.

In late 117, while sailing back to Rome, Trajan fell ill and died of a stroke in the city of Selinus. He was deified by the Senate and his ashes were laid to rest under Trajan's Column. He was succeeded by his adopted son Hadrian.

He died 8 August 117 (aged 63) in Selinus, Cilicia, (now Gazipaşa, Antalya Province, Turkey). His ashes were buried at the foot of Trajan's Column, now lost), in what is now Trajan's Forum, Rome, Italy

He was succeeded by Hadrian, his ward and adopted son.

Is Marcus your ancestor? Please don't go away!

ask our community of genealogists a question.
Sponsored Search by Ancestry.com
DNA
No known carriers of Marcus's ancestors' DNA have taken a DNA test. 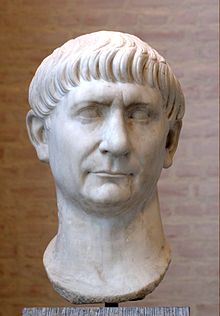