Richard Allen Trask was born on 16 September 1919, in Kansas City, Missouri. His parents were Charles Wesley Trask and Anna L.

Richard was a survivor of the Bataan Death March.
Richard enlisted in the United States Army on 6 January 1941.[1]

Richard died at the age of 99 at the Thomas E. Creek Veteran's Administration Medical Center in Amarillo, Randall County, Texas.

He was born in Kansas City, Missouri to Anna and Charles Wesley Trask on Tuesday, September 16, 1919. He spent his earliest childhood in Independence, Missouri. The family moved to Albuquerque, New Mexico when he was a young child. He graduated from Albuquerque High and played in the AHS band. Richard enlisted in the 200th Coast Artillery on January 6, 1941, and was sent to the Philippines as part of the 515th Coast Artillery. He was a survivor of the horrific Bataan Death March and also spent three and half years in a Japanese prison camp. After WWII was over, and he was released from the prison camp he returned to Albuquerque. It was there he met Sophie (Babe) Hendricks, and they were married on January 5, 1947. They spent 63 wonderful years together. He was a member of St. Luke's Lutheran Church in Albuquerque for many years and spent some time as their treasurer. Richard and Babe moved Arizona in the 1990s living in Sun City West and Surprise. A year after Babe's death in 2010, Richard moved to Clovis, New Mexico to live with his son, Rick and his wife. He later moved to the Thomas E. Creek VA Medical Center in Amarillo, TX where he spent the last several years of his life. The family is grateful and thankful for the great care that the staff gave him during that time. While living in Albuquerque, Richard and Babe enjoyed many summers at their trailer in Ruidoso often entertaining friends and family. He loved going to the horse races and always spent time studying the race form before heading to the track. He enjoyed the casinos and especially liked going to Laughlin, Nevada. Richard also liked fishing and camping and was a fan of big band and swing music.

He was preceded in death by his parents; his wife, Babe; a brother, Wesley Trask; and two sisters, Helen Temperly and Anna Gaull. He is survived by his son, Rick Trask (Kathi) of Clovis, NM; daughter, Pamela Brosman (Jeff) of Mesa, AZ; son, Jeffery Trask (Patricia Good) of Albuquerque; grandchildren, Jennifer Trask (Aaron), Mark Trask (Lindsay), Jessica Earle (Ryan), Andrea Wingate (John) and Reese Good-Aurnell; great-grandchildren, Richard, Misty, Victor, Thaddeus, Zola, Stormy, Chole, Riley, Candem, Javie as well as Jamison who will be arriving in August. Richard also had many nieces and nephews who were special to him. 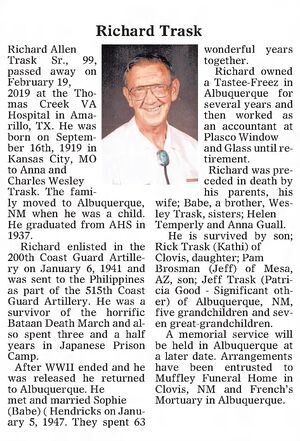