She married Henry IV of Castile. Blanca remained a virgin, not only on her wedding night, but for the rest of her marriage. After thirteen years, Henry sought the annulment of the marriage. An official examination confirmed the virginity of Blanca. A divorce was granted by the Pope on the grounds that some "witchcraft" had prevented Henry from consummating the marriage. Blanca was sent home, where her family imprisoned her, and she was later killed by poison in 1464. She remained childless throughout her life.

After the death of her brother in 1461, some Navarrese dissatisfied elements and some of the anti-Aragonese party regarded Blanca as the rightful monarch, as they had regarded Charles. They proclaimed her queen. She would have thus become Blanche II of Navarre, had not her father (who wanted to keep the government of Navarre) already had her incarcerated and thus not capable to act. Upon her death, her rights to Navarre were inherited by her next sister, Eleanor of Aragon, Countess of Foix, who however was their father's ally and supporter, and did not press her own claims until his death in 1479.

Is Blanca your ancestor? Please don't go away!

ask our community of genealogists a question.
Sponsored Search by Ancestry.com
DNA Connections
It may be possible to confirm family relationships with Blanca by comparing test results with other carriers of her ancestors' mitochondrial DNA. Mitochondrial DNA test-takers in the direct maternal line: 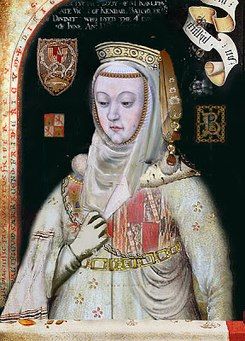 The Spain Project would like to co manage this profile. Would you please add wikitree-spain-project@googlegroups.com as manager.

Blanca is 21 degrees from Donald Howard, 17 degrees from Julia Howe and 3 degrees from Henry VIII of England on our single family tree. Login to find your connection.