John Tregonwell was the son of John Tregonwell and his wife Jane Freke[1] He was born on December 7th 1625 and baptised on the December 11th in the parish church at Iwerne Courtney (Shroton) Dorset (substantially rebuilt by her Jane's father Sir Thomas Freke, only 15 years earlier)[2] [3]

As a child, John had a lucky escape from death. When he was about five years old, he was taken by his nurse onto the roof of the transept of the Abbey church, whilst some repairs were taking place. She was distracted and John climbed over the parapet but overbalanced and fell 60 feet to the ground. The shocked nurse rushed down the steps to the church yard fully expecting her charge to be dead. She is said to have found John sitting on the grass, unhurt and picking daisies. It is thought that the full dress worn by the young boy inflated and acted as a parachute, saving his life [4]

He married Jane Fenn, in 1652 [5] (according to several authors, including Hutchins ,Burke and also Gilbert in the reference given above Jane Fenn was a daughter of Sir Robert Fenn, Sheriff of London and Lord Mayor of London. However there was no Lord Mayor of London called Robert Fenn . The Mayor in 1637 was a Richard Fenn . Jane appears to be his niece. She was the daughter of his brother Robert and sister of another Richard who died without issue and from whom she inherited the manor of Christchurch in Hampshire .This estate then passed to her daughter Mary and her husband [6]

In his will proved in April 1681, John bequeathed a chained library of valuable books to be kept in the vestry of Milton Abbey church.[9]

‘To the memory of John Tregonwell, late of (Milton Abbas, in the County Dorset, Esqr. who dyed the 20th of January, 1680, and by his last will and testament gave all the bookes within this Vesty to the use of this Abbey Church for ever as a thankful acknowledgment of God’s wonderfull merçy in his preservation when he fell from the top of this Church is this Monument erected at the proper cost and charges of Jane Tregonwell, his relict and executrix.’ [10] [11]

Many sources including the Dorset Historic Churches site and also a placard in Milton Abbey itself suggest that the 'miraculous escape from death occurred in 1605,This would mean that the incident happened to this John Tregonwell's father At the same time the story is attributed to the son of John and Jane Freke. This couple did not marry until 1624 and this John was their first child born a year later (Burke ,Gilbert cited below) It is also clear from the will and from the memorial inscription that the John who died in 1680 was the John who bequeathed the chained library as a thank offering. In 2016, the South transept where the portrait of young John Tregonwell in his life saving pinafores normally hangs was under restoration so the portrait had been removed. In the lady chapel of Milton Abbey that was being used as a vestry/storeroom, a photograph of the painting was on the wall. Inscription John Tregonwell 1625-1690 (the latter date is certainly incorrect, on the evidence I have found so far, I think this birth year is more likely to be correct hence the incident would have taken place c 1630 )

Images: 2
Photo of original portrait of young John Tregonwell in the clothing that may have saved him. Date underneath reads 1625-1690 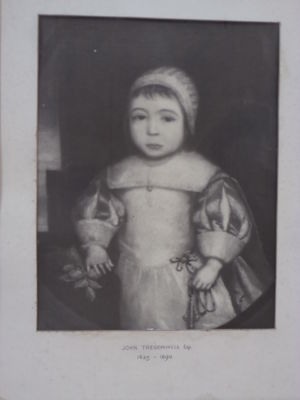 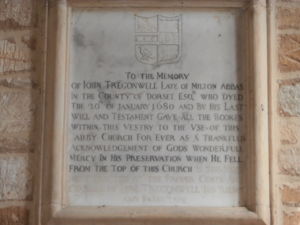