Ellen Tricker was born in the June Quarter of 1878. Her Mother's maiden Name was DIAPER Registered at Stow [1]

The 1891 Census shows Ellen lives with her family at 38 Cardinals Road in the Civil Parish of Stowmarket. She is now 13 years old and is in paid employment as a Domestic Servant. Her siblings are all still going to school. Ellen Tricker in household of George Tricker, Stowmarket, Suffolk, England; [2]

While working in Middlesex, London Ellen met her future husband Charles Edward MILLS. They married at St Luke's Church of England in Hackney, Middlesex on the 30th Of October 1898. You will find Ellen under the name which has been transcribed as FRICKER [3]

In 1901 Ellen & her husband Charles are living in Millfield Rd in the Civil parish of St James Hackney at the time of the census. Their first child Ellen May Mills is 1 year old. Ellen Mills in household of Charles E Mills, Hackney, London, Middlesex, England; [4]

Ellen was next located with her family on the 1911 census . She was living at 73 Salop Rd, Walthamstow, Essex, This is in the registration district of West Ham. This tells us Ellen is at the age of 33 years and has been married 12 years. It shows that Charles & Ellen now have 4 children, two boys & two girls, ranging in age from 11 down to 2 years. Charles was born in Clapton, Middlesex, London and he is working as a Stoker at the Electric Light Branch of the G.P.O.[5]

Ellen lived a good long life dying at the age of 87 years, and with her husband Charles dying just a couple of years earlier. It looks as though they had moved back to Suffolk sometime after the last census. Ellen died at Gipping in the shire of her birth, Suffolk in 1965. She died during the 1st Quarter of the year. Ellen was buried with her husband at the St Peter's Cemetery at Henley, Suffolk, England. [6]

When this person was created on 06 January 2010 through the import of Gedcom File gl120368.ged, certain information could not be interpreted.

ask our community of genealogists a question.
Sponsored Search by Ancestry.com
DNA
No known carriers of Ellen's ancestors' DNA have taken a DNA test. 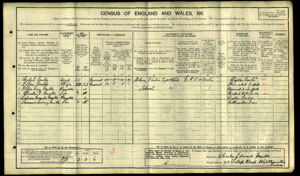