Identity of Mother and DNA Notes

Kenneth Bell Trimble said that William Thomas Trimble's father (and Kenneth's grandfather), Milton Trimble, was married to "two Copeland sisters" before marrying his last two of his four wives[1] One of these would be William's mother.

"Copelin" or "Coplin" families were neighbours of and intermarried with the Trimbles and related lines. We know from a damaged Baxter County, Arkansas, marriage record that Milton's second wife was named Elizabeth (last name burned) and she was born in approximately 1851... if they were married in 1873. (The year is also burned away, but other records on the page are from 1873.) Baxter County is adjacent to Marion County, where these families lived, and there is a note at the bottom of this particular record that the certificate of ordination was filed in Yellville, in Marion County.

Two daughters of Thomas Copelin of 1860 Ozark County Missouri, "Mary E." born in 1854 with an older sister of Nancy Emeline born in 1850 , seem to be the best - albeit not ideal - fit of all Copeland/Coplin/Copelin candidates in the area for being Milton's first two wives. They are around the expected age, in the right place, and Nancy Emeline disappears at the right time in the records. Whether Mary does as well remains to be discovered.

Payton Yocham (spellings vary, a half-cousin to the alleged descendants of Nancy Emeline) married a Mary Copeland who was born in 1856. Some online trees have attached her to the family of Thomas Copelin described above.

This may be accurate. However, researchers should be aware that at least two Mary Copelins were born in this area in the mid-1850s. The other one was born circa 1856 (as opposed to circa 1854) and is enumerated in the 1860 household of the aging Isaac and Margaret Copelin in Ozark County, parents of Thomas and other Copelins in the area.

Two Mary Copelins (with variant spellings) were enumerated in the area in 1870: one, a domestic servant born 1856, in Sugarloaf Township in Marion County, and the other - born 1854 - still in Ozark County and "without occupation". The former is in the household of Elias Keesee, brother-in-law of Thomas Copelin via a later marriage, and possible uncle of Mary Copelin. It's unclear when Thomas' first wife died and when his second wife's - Zenna Keesee - first husband died. Confusingly, her children are enumerated as "Copland" along with their step-siblings in 1860. Zenna and first husband Samuel Bevins do have a different child named Mary in the 1850 census, one who seems to be living with her brother Elias 20 years later, so does that put to rest the idea that Zenna is Mary E.'s mother... or did Samuel Bivens have another wife (and/or did neither Samuel nor Zenna mind the idea of another daughter named Mary)?

Meanwhile, the Keesee household is a few away from the Trimbles and other related households, including Milton Trimble's. The Mary Copelin in Ozark County is in the household of Margaret Copelin (Graham) - a daughter of Isaac and Margaret - and presumably a niece or cousin or perhaps even a sister to this other Mary.

One of these Mary Copelins marries Payton Keesee in 1874, according to the 1900 census, although we don't know where. Her father's name is given as "Joe Copeland" on her death certificate, mother's name unknown, and her own name is said (by her daughter, the informant) to be "Mary Elizabeth". (She is also "Mary E" in the 1910 census.)

The other Mary Copelin disappears... or she marries Milton Trimble.

Or she marries her brother-in-law Milton Trimble, realises that was a bad move, and they divorce... and she marries Payton Keesee, and we're still left with an extra Mary Copelin, but it could just be how it is.

Or, she has nothing to do with Milton Trimble because the two Copeland sisters didn't exist or were actually sisters with a similar name or on an allied or were, say, the unluckily twice un-enumerated children of Elias Copelin, a younger (maybe too much younger) brother of Thomas who seemingly disappears after the 1850 census. All possibilities must be considered, just as it is possible that the Mary Elizabeth Copeland who married Payton Yocham is not the daughter of Thomas but the very late-in-the-game daughter of Isaac and Margaret, or even an unenumerated son of theirs named "Joe" who died before 1850, leaving Mary in her grandparents' care. (Guardianship papers for other grandchildren of Isaac and Margaret exist, but this proposed adoption may have been less legally tangled.)

A parent/child relationship between Nancy Emeline Copelin and William Thomas Trimble is not proven and must still be treated carefully. Autosomal DNA matching is complicated by the fact that many Copelin matches are related to William Thomas Trimble's descendants through other ways. That said, F. Lewis (great-granddaughter of the unknown Copeland sister) has a substantial number of DNA matches to descendants of seven of the children of Isaac and Margaret Copelin, usually through multiple lines, many with no known connections elsewhere. (Most of these Copelins married Keesees, so the possibility of heretofore unknown direct ancestral connections to the Keesees et al should be explored, but it is telling that equally ample and varied DNA matches exist to descendants of Isaac's siblings as well as his aunts and uncles.)

At this point, though, no segments have been triangulated, and it is too soon to say for certain that William Thomas Trimble's mother was a Copelin or that she was Nancy Emeline Copelin in particular. 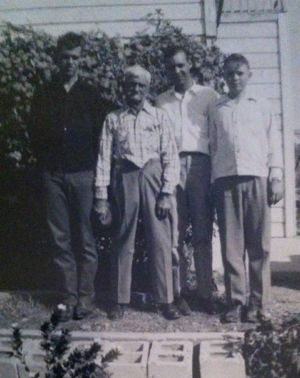 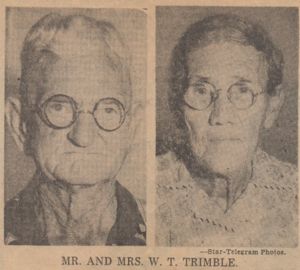 William is 12 degrees from Donald Howard, 17 degrees from Julia Howe and 15 degrees from Henry VIII of England on our single family tree. Login to find your connection.