Harry’s father was a farmer in Missouri. In 1890 the family moved to Independence, Missouri, where Harry met his future bride, Bess Wallace, in Sunday School at the First Presbyterian Church. Harry attended schools in Independence and graduated from Independence High School (today named William Chrisman High School) in 1901. He learned to play the piano and briefly considered a career as a concert pianist. He attended Spalding’s Business College, but economics forced him to give up schooling in favor of work. He worked in the mail room at the Kansas City Star (two weeks), as a timekeeper on a railroad construction project, as a clerk for a bank, and then as a bookkeeper for another bank. In 1906, his family moved back to Grandview, Missouri, where Harry helped his parents and brother Vivian, manage and operate the 600-acre family farm. After his father died in 1914, he was appointed road overseer for the southern half of Washington Township. The following year he was appointed Postmaster in Grandview, Missouri. He invested in an unsuccessful zinc-mining venture. He helped organize an oil-drilling company, investing in this endeavor also. He served as the company’s treasure, and perhaps, became broke even before the company was dissolved in 1919.[2]

In 1905, Harry joined Battery B of the Missouri National Guard, as a private, but was soon promoted to corporal. He continued in the National Guard until 1911, and then rejoined in 1917. He was elected first lieutenant of Battery F, 2nd Missouri Artillery. In August he was sworn into the regular army as a member of the 129th Field Artillery Regiment. Harry’s unit was shipped to France, where he was promoted to Captain. He was given command of Battery D, 129th Field Artillery regiment, 35th Division. The battery was composed of 188 men, 167 horses, and a complement of French-designed 75mm guns. On 06 September, they engaged in their first combat operation in the Vosges Mountains. They fought in the Argonnes Campaign, firing their last round on 11 November 1918 at 10:45 AM. Harry was discharged 06 May 1919. In 1920, he was appointed Major in the Field Artillery, Officers Reserve Corps.[3]

Still looking for the right career, Harry and a partner opened a men's haberdashery store, in Kansas City, Missouri. When the business failed Truman didn’t file for bankruptcy. Instead over the next fifteen years he paid off his share of the debts.[2]

After the war he became part of the political machine of Tom Pendergast and was elected a county judge in Missouri and eventually a United States Senator. After he gained national prominence as head of the wartime Truman Committee, Truman replaced vice president Henry A. Wallace as Roosevelt`s running mate in 1944.

As president, Truman faced challenge after challenge in domestic affairs. The disorderly reconversion of the economy of the United States was marked by severe shortages, numerous strikes, and the passage of the Taft-Hartley Act over his veto. He confounded all predictions to win re-election in 1948, largely due to his famous Whistle Stop Tour of rural America. After his re-election he was able to pass only one of the proposals in his Fair Deal program. He used executive orders to begin desegregation of the U. S. armed forces and to launch a system of loyalty checks to remove thousands of communist sympathizers from government office, even though he strongly opposed mandatory loyalty oaths for governmental employees, a stance that led to charges that his administration was soft on communism.

Truman's presidency was also eventful in foreign affairs, with the end of World War II and his decision to use nuclear weapons against Japan, the founding of the United Nations, the Marshall Plan to rebuild Europe, the Truman Doctrine to contain communism, the beginning of the Cold War, the creation of NATO, and the Korean War. Corruption in Truman's administration reached the cabinet and senior White House staff. Republicans made corruption a central issue in the 1952 campaign.

Truman, whose demeanor was very different from that of the patrician Roosevelt, was a folksy, unassuming president. He popularized such phrases as "The buck stops here" and "If you can't stand the heat, you better get out of the kitchen."

He overcame the low expectations of many political observers who compared him unfavorably with his highly regarded predecessor. At one point in his second term, near the end of the Korean War, Truman's public opinion ratings reached the lowest of any United States president, but popular and scholarly assessments of his presidency became more positive after his retirement from politics and the publication of his memoirs.

He died in 1972.[4] Many U. S. scholars today rank him among the top ten presidents. Truman's legendary upset victory in 1948 over Thomas E. Dewey is routinely invoked by underdog presidential candidates.

Sponsored Search by Ancestry.com
DNA
No known carriers of Harry's DNA have taken a DNA test. 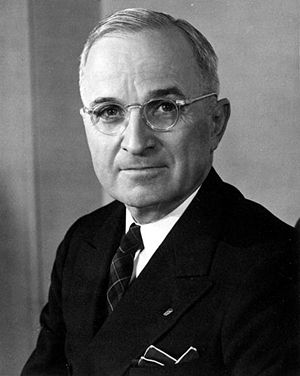 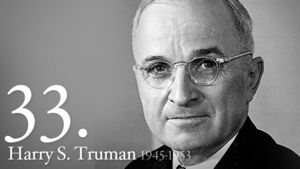 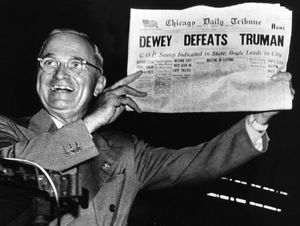 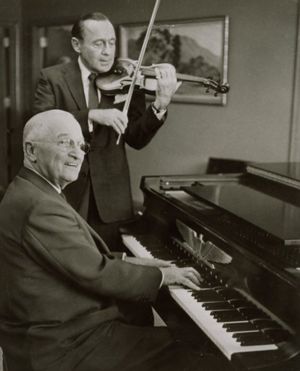 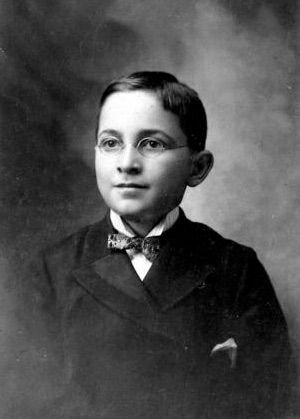 Chris Whitten
David: This is great! Thank you for starting this!
posted Jul 20, 2009 by Chris Whitten

Categories: US Presidents | This Day In History May 08 | Collaborative Profile of the Week | Baptists | US Vice Presidents | US Senators from Missouri | Freemasonry | Sons of Confederate Veterans | Missouri, Notables | Notables