Elizabeth Tudor is a member of the House of Tudor.

Known as ‘Gloriana’, the first Queen Elizabeth (Elizabeth I) is remembered as one of England’s most influential monarchs.[1] A descendant of the Tudor line, Elizabeth’s 45-year reign was colorized by great successes and a jubilant Elizabethan Age. But unlike previous sovereigns, receipt of the crown would not come as a simple birthright for Elizabeth.[2]

Birth of a Princess

Elizabeth was born between 3 and 4 pm on 7 September 1533, at Greenwich Palace in Kent. She was christened on 10 September 1533 at the Friars Church of Greenwich in Kent, which was an elaborate event.[3] The youngest daughter of Henry VIII and Anne Boleyn.[2][4] She was named after her paternal grandmother Elizabeth of York.[5][6] Elizabeth’s childhood was marred with uncertainty. When Elizabeth’s mother failed to give King Henry a son, she was executed on charges of adultery. Elizabeth was only two years old at the time that she lost her mother. This would have a profound effect on her life and future decisions.[2] Viewed as an illegitimate child, Elizabeth’s succession seemed ill-fated. Behind her half-sister, Mary, and upon the birth of her half-brother, Edward, in 1537, Elizabeth stood third in line for the crown.[6]

Despite these tribulations, Elizabeth received an excellent education, becoming well versed in Latin, Greek, French, and Italian. Elizabeth's tutors along with her step-mother Catherine Parr made a lasting impression on Elizabeth. These favorable attributes would later serve Elizabeth well.[2] Sir William Cecil had appointed her a most influential tutor, the highly educated Roger Ascham. This would become a lifelong relationship of, friendship and respect. He continued throughout his lifetime to read Greek and play Chess with Elizabeth. Ascham once wrote:[7][8]

Yea, I believe, that beside her perfect readiness in Latin, Italian, French, and Spanish,
she readeth here now at Windsor more Greek every day than some prebendary
of this church doth read Latin in a whole week.

When he died Elizabeth exclaimed that she would rather have cast 10,000 into the sea than lose her Ascham.[7][9]

In 1554/5 during her sister Queen Mary I's reign, Elizabeth was accused of being involved in Wyatt's rebellion. It was an attempt to stop the marriage of Mary to the future King Philip of Spain. If the plan had been successful, Elizabeth would have replaced Mary as Queen. Mary ordered that Elizabeth be locked in the Tower, although there was no proof that she had been involved. Elizabeth wrote a letter begging for an audience with her sister so that she may plead her innocence.[10][11]

If any ever did try this olde sayinge that a kinges worde was more than a nother
mans othe [oath] I most humbly beseche your Majestie to verefie it in me and
to remember your last promis and my last demaunde that I be not condemned
without answer and due profe wiche it semes that now I am for that without
cause provid [proved] I am by your counsel from you
commanded to go unto the tower....

Elizabeth finally ascended the throne in 1558.[12] She was just 25 and, England was a country in turmoil; torn apart by bitter religious conflict and mounting political tension. Gender aside, countrymen had little confidence that Elizabeth could provide the solid foundation and leadership that England so desperately needed.[13] However, there were many who rejoiced her ascension to the throne having experienced such brutality during her sister Mary's reign.[14][15] Although she gave her first speech on 20 Nov 1558 and was actively reigning as Queen. It was not until 1 February 1559/60 that the Bill for the Recognition of the Queen's Highnesse's Title to the Imperial Crown of the Realm was read the first time. On the 10th of February, the first reading of the Bill against Slanderous and Seditious words was enacted. This stated that Elizabeth was made inheritable to the late Queen Ann her Majestie's Mother.[16][17]

She would quickly prove how capable she was. By gaining the support of her male constituents and leveraging the Tudor concept of firm rule, Elizabeth I was triumphant in preventing the outbreak of civil and religious war within the boundaries of England.[17] One of her first acts was to appoint Sir Nicholas Bacon, Lord Keeper of the Great Seal of England. [13][18] She appointed Sir William Cecil, later Lord Burghley, first as her principal secretary and later as Lord High Treasurer. He was an active member of her privy council throughout her reign.[1] She quickly surrounded herself with men of high standing. [19]

Elizabeth’s shrewd political tactics helped propel England into a prominent position of European power and greatly expanded the kingdom’s reach in the New World with the exploratory voyages of Sir Francis Drake and Sir Walter Raleigh.[16][20][21][22] The Elizabethan Age was also a peak in English Renaissance. Amid expressive art and poetry, literature blossomed with the fanciful works of William Shakespeare, Christopher Marlowe, and Edmund Spencer. Elizabeth inspired an exuberant national spirit.[23]

Not everyone favored Elizabeth's policy to restore the Protestant faith in England. Plots to depose her, and return the country to Catholicism cropped up time and again, but they ultimately failed. Elizabeth reintroduced a modified version of the Act of Supremacy and the Act of Uniformity. This ensured that the Church of England and Elizabeth were in control. It took back the power of Catholic Rome that her sister Mary I had brought back to England. The Act of Uniformity ensured that the Protestant religion would be tolerated. Protestant and Catholic beliefs were taken into consideration when drafting the Act, although it did lean more towards Protestant beliefs. Sir Anthony Cooke who had previously been exiled in France was asked to review the Act before its passing.[24][25][26]

Elizabeth's cousin, Mary Stuart, Queen of Scots was a devout Catholic and likely successor. Elizabeth feared with Mary being a ruling Catholic Queen and an heir to the English throne, that she may become the preferred ruler of England. So, Elizabeth imprisoned her for 19 years without charging her with a crime. Elizabeth was very disturbed by the thought of putting to death another sovereign. Letters that were written by Elizabeth show that she was unsure of taking such a drastic step. Elizabeths' Commissioner's convicted Mary and ordered her execution. It would take a week for them to convince Elizabeth to sign the order for Mary's execution.[27][28][29][30][31]

In 1587, Mary Stuart was executed with an ax. The execution of a Catholic Queen by a Protestant Queen enraged many of the "Pope's faithful", including Mary I's widower, Philip II of Spain.[27][28] Relations between England and Spain were already strained. Yet, Elizabeth's covert privateers raided rich Spanish vessels and ports, while her soldiers supported Protestant Dutchmen rebelling against Catholic Spanish rule. [32]

Encouraged by the Pope, Philip II in 1588 sent his Spanish Armada to raid England. It was during this famous segment of the Anglo-Spanish War (1585-1604) that Elizabeth stirringly addressed her troops at Tilbury:[33][34][35]

"....I may have the body of a weak and feeble woman,
but I have the stomach of a King,
and a king of England, too! .......we shall shortly have a famous victory over those enemies of my God, of my kingdom, and of my people."

It was a close battle, but Elizabeth won and England remained under Protestant rule.[36][37]

Although she received many proposals and had many potential suitors, Elizabeth chose to never marry or have children. She was often pressed throughout her reign to marry and produce heirs. Elizabeth stood firm in her convictions and refused to be told what to do.[38] She turned down many suitors including the King of Sweden, Eric XIV.[39] Elizabeth publicly announced that she was married to England and that the people of England were all her children. She wore a ring as a symbol of her union to the country.[40]

She avoided naming a successor. Although, pressure for her to do so was consistent throughout her reign. She often said that it was too great a matter to make such a decision lightly. She had excluded Mary Stuart even before Mary's execution. Mary was a hereditary heir to the English throne, Mary and Elizabeth both being descendants of King Henry Tudor VII.[41]

Elizabeth died on 24 March 1602/3, bringing an end to the remarkable Tudor dynasty. James I, the son of Mary Stuart, was Elizabeth's royal successor.[42]. Although her death would mark the passing of a glorious era, the legacy of Queen Elizabeth I would forever live on. 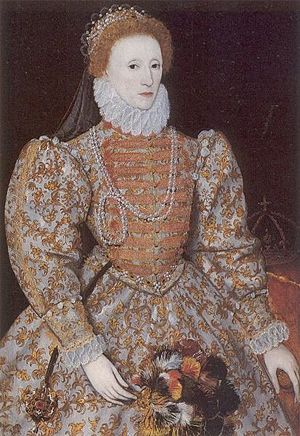 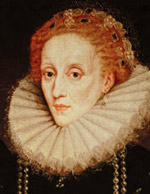 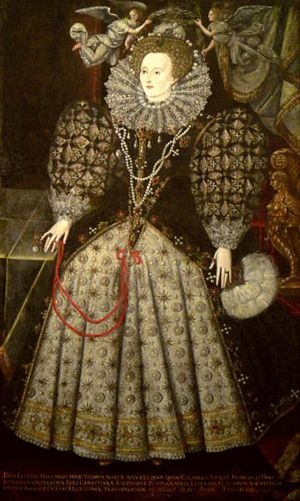 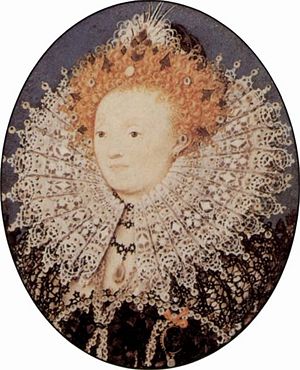 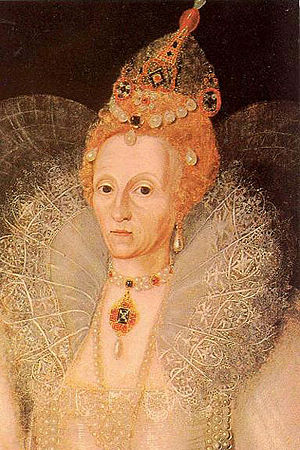 Jo Fitz-Henry
If you are related to Queen Elizabeth, rather than post it here (where it will get archived), why not tell everybody about it in the "Which "Extraordinary Elizabeth" are you most closely connected to?" post on G2G?

Everyone on WikiTree can see it on G2G, and it's permanent so other cousins descended from Elizabeth can find you in future.

You can also get a personalised sticker from the G2G post for your profile biography showing your relationship with Elizabeth. (See the comments section, just under the main post)

Dennis Stewart
As far as I know she never actually said those words. It's a fictional quote from the movie. But it does capture the passion of what really happened. She would be a way distant cousin to me.
posted Mar 13, 2021 by Dennis Stewart

Dennis Stewart
In the film "Elizabeth The Golden Age", Queen Elizabeth said to her council as the Spanish Armada approached, "...this Armada that sails against us carries in its bowels the Inquisition, God forbid it succeeds. For there will be no more liberty in England of conscience, or of thought, we cannot be defeated." I highly recommend this movie.
posted Mar 12, 2021 by Dennis Stewart

Laura DeSpain
Thank you, Dennis, for your interest in Elizabeth's profile. I have been unable to locate a reliable source for the above quote. I have found several movies that have made that quote. Do you know of a reliable source that may be used to add that information? Your collaboration is appreciated.