Henry VII (Tudor) of England is a member of the House of Tudor.

Henry Tudor the son of Edmund Tudor, Earl of Richmond and Margaret Beaufort was born posthumously in Pembroke Castle on 28 January 1457, [1] as the Earl of Richmond. He lived at Pembroke Castle under the care of his uncle Jasper, Earl of Pembroke, until 30 Sept 1461, when the castle was surrendered to Lords Herbert and Ferrers of Chartley. Henry lost the earldom before 12 Aug 1462 when he and his uncle fled to Britanny after the Lancastrian defeat at Tewkesbury on 4 May 1471.[1]

Henry's paternal grandparents were Owen Tudor and Catherine of Valois and via his mother he was the great-great-grandson of John of Gaunt and Katherine Swynford.[2]

Henry's claim to the English throne was tenuous at best. His mother descended from John of Gaunt's affair with Catherine Swynford.[3] Though their children born out of wedlock were legitimized by Parliament, all claims of this line were not valid until the direct male line of John of Gaunt became extinct.[4]

Henry's paternal grandfather, Owen Tudor, had married Catherine of Valois, the widow of Henry V and daughter to Charles VI of France. Their son Edmund, being the half brother of Henry VI, was created Earl of Richmond. He married Margaret Beaufort, only daughter of John, Duke of Somerset, and died more than two months before their son Henry Tudor, was born.[4]

Jasper and Henry sailed to join the uprising against King Richard III in 1483 but were unable to land. On 25 Jan 1484 he was attainted in his absence.[1] Despite these failed revolts and his Lancastrian connections, Henry eventually won the throne.[3]

On 1 Aug 1485 Henry sailed from Harfleur, landing at Milford Haven. His forces defeated Richard III at the Battle of Bosworth Field on 22 August 1485 and he seized the crown as Henry VII, King of England. He was crowned 30 October 1485 at Westminster Abbey.[1][5][1]

While Henry's claim to the throne was weak and possibly illegal,[6] he dated his reign from the day before Bosworth.[7]

In an act of attainder Parliament declared that Richard of Gloucester was a traitor who usurped the throne and 'by great and continued deliberation, traitorously levied war against our said sovereign lord and his true subjects'.[8]

The marriage was an act to gain Yorkist support, and bring an end to civil war by uniting the Red Rose of Lancaster and the White Rose of York.[4]

Elizabeth of York died in childbirth. She was buried in Westminster Abbey. [1]

Henry VII & Elizabeth of York had eight children. Four of them died during their infancy or in youth.

(Royal Tombs of Medieval England)[9] -- Henry VII planned his tomb well before he died. Henry had a dynastic point to make and was forced to give his monument early consideration because the most senior burial positions in the Confessor's Chapel at Westminster were occupied. In 1496 Henry had began the rebuilding of the chapel of St. Edward at Windsor for his tomb, but by 1504 had transferred his plans from Windsor to Westminster, when he founded a chantry there for himself, his wife, Elizabeth of York, his parents and ancestors. In 1506 Margaret Beaufort founded a Westminster chantry of her own. Henry VII's will of 1509 boasts his grandmother's twin royal status of being the wife of an English king (Henry V) and daughter of a French one (Charles VI) and cites her burial at Westminster as one reason why he wished to be buried there himself. Work on his chapel continued until Henry's death in 1509, with his will providing considerable funds for its completion. In 1507 Henry appears to have commissioned a new tomb featuring gilt effigies of himself and Elizabeth of York with a tomb-chest executed in black and white marble.

Henry died at Richmond on 21 April 1509. His new chapel, unfinished, was consecrated the day before in preparation of burial. The king's coffin was taken to St. Paul's in London bearing a funeral effigy dressed in parliamentary robes with crown, scepter and orb. The coffin lay beneath a canopy of cloth of gold with its carriage drawn by seven horses wearing funerary trappings accompanied by 330 torchbearers and with knights carrying royal and religious banners. The coffin was installed before St. Paul's high altar for the singing of Mass and then the coffin was returned to its carriage for the journey to Westminster. At Charing the carriage was met by abbots of the various cathedrals and Westminster monks. Accompanied by a further 100 torchbearers the carriage continued to the west door of the abbey church, with the coffin being installed either before the high altar or in Henry's new chapel, that part not being recorded. Mass was sung and the coffin was interred.

The foundations of Henry's new chapel incorporated a large vault at the east end, and it was here that Henry and his wife Elizabeth of York were buried.

Henry's tomb was commissioned in 1512 and completed until around 1518. It has gilt-bronze effigies with a black and white marble tomb-chest. The effigies show the couple with hands clasped in prayer. The only sign of royal status being two gilt crowns were lost. Both are clearly portraits with Henry's effigy probably modeled on a death mask.

In 1867 the vault beneath the tomb was opened and found to contain three lead coffins. The coffins of Henry VII and James I (d.1625) were identified by inscriptions and a third coffin bearing a large cross but without inscription almost certainly being that of Elizabeth of York. [10]

Sponsored Search by Ancestry.com
DNA Connections
It may be possible to confirm family relationships with Henry VII by comparing test results with other carriers of his Y-chromosome or his mother's mitochondrial DNA. Y-chromosome DNA test-takers in his direct paternal line on WikiTree: 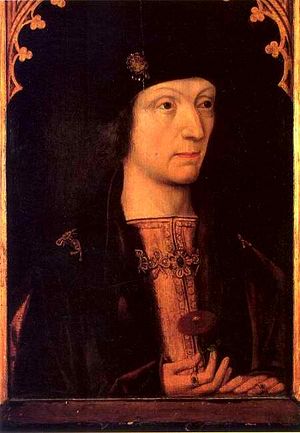 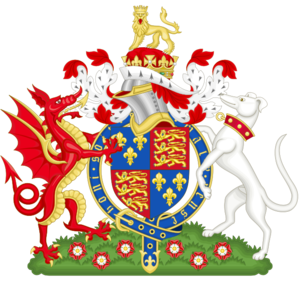 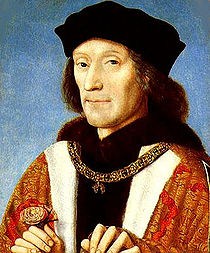 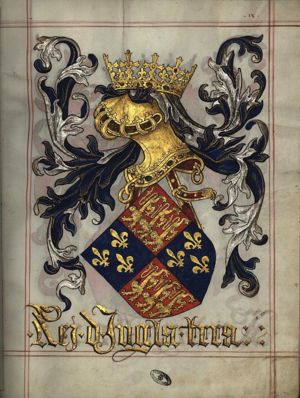 Leave a message for others who see this profile.
There are no comments yet.
Login to post a comment.
[Living Scott]
Henry VII is Mentioned in The Works Of William Shakespeare, Volume 1https://books.google.ca/books?id=IkVhAAAAcAAJ&pg=PP71&lpg=PP71&dq=Paternal+ancestry+of+Henry+VIII&source=bl&ots=CV87gMBLtM&sig=fVfupfHZmn-yjDWX2UvbVGp-LQc&hl=en&sa=X&ved=2ahUKEwjW9Z7mh5beAhViqlkKHQIzAGU4KBDoATAGegQIAxAB#v=onepage&q=Paternal%20ancestry%20of%20Henry%20VIII&f=false
posted Oct 20, 2018 by [Living Scott]
[Living Scott]
https://books.google.ca/books?id=0CZkAAAAcAAJ&pg=PA263&lpg=PA263&dq=Paternal+ancestry+of+Henry+VIII&source=bl&ots=a5Ii2wU4ZT&sig=xn1OGRY1VJ1lSa9ZzDTYCM2Vsuc&hl=en&sa=X&ved=2ahUKEwjW9Z7mh5beAhViqlkKHQIzAGU4KBDoATAAegQIChAB#v=onepage&q=Paternal%20ancestry%20of%20Henry%20VIII&f=false
posted Oct 20, 2018 by [Living Scott]

We are 11th cousins, 15 times removed, and are both descendants of Richard (Lucy) de Lucy.

John Elkin
Howe-1317 and Tudor-18 appear to represent the same person because: Year of birth given for Howe-1317 is actually the year Henry VII was crowned.
posted Jan 07, 2016 by John Elkin

Henry VII is 18 degrees from Laurie Giffin, 30 degrees from Toni Morrison and 1 degrees from Henry VIII of England on our single family tree. Login to find your connection.