Negotiations for her Marriage

On 5 October 1518 she was espoused to François, the French Dauphin. There was an elaborate ceremony, with the young Mary bejewelled and dressed in fine robes. A dowry of 330,000 crowns had been agreed on 1 October.[3]

This marriage was called off. Mary was a pawn in her father's foreign policy. In 1521 a treaty made provision for her marriage to the Holy Roman Emperor Charles V, but that came to nothing. The possibility of her marrying the Dauphin François was then resurrected, with an alternative of François' younger brother Henri, but this too never happened.[2]

The divorce of her parents profoundly changed Mary's life. Mary took her mother's side, and never accepted Anne Boleyn. After Henry VIII married Anne Boleyn, Mary was formally deprived of the title of Princess: Mary at first refused to accept this but was eventually forced to drop the title. She was deprived of most of her servants, and moved from residence to residence. She suffered substantial ill-health.[2]

In March 1534 Mary was declared illegitimate by the Succession Act. Mary refused to swear an oath accepting that Anne's children would be rightful heirs to the throne. After Anne Boleyn's execution in in May 1536, Mary finally, under protest and threat of being executed herself, formally acknowledged the invalidity of her mother's marriage to Henry VIII, and returned to the court.[2]

The birth of the future Edward VI in 1537 made it easier for her to live with her position, as a male heir took precedence over any female heirs in the succession. She became a godmother to Edward. Periods of ill-health continued.[2]

In 1543 her life improved further: Henry VIII married Katherine Parr, and Katherine and Mary got on well together. That year an Act of Succession established her position in the line of succession to the throne.[2]

The reign of Edward VI was a difficult one for Mary. In the latter years of Henry VIII Mary had practised her Roman Catholic faith in private. Under Edward VI religious policy became more Protestant, and Mary found herself under intense pressure to abandon her Catholic principles. Her servants were interrogated. Despite this, Mary refused to conform, asserting that legislation on religious reform "in my conscience, is not worthy to have the name of law." In 1550 the Holy Roman Emperor organised an attempt to help her escape to the Continent, but in the end she decided not to take advantage.[2]

Edward VI's death in 1553 led to a crisis. Shortly before his death, Edward had been persuaded by John Dudley, Earl of Northumberland, to name Lady Jane Grey, wife of Dudley's son Guilford and a staunch Protestant, as his successor. Mary's stubborness when she felt something vital to her was at stake once more manifested itself. Against advice, she declared herself Queen, and gained substantial support as county after county supported her. John Dudley found there was little public enthusiasm for the alteration in the succession arrangements laid down in the 1543 Act of Succession. He was deserted by other members of the royal Council, and on 3 August Mary entered London as Queen.[2]

Mary was crowned on 1 October 1553. Parliament quickly declared Mary a legitimate child of Henry VIII. Negotiations took place for marriage with Philip II of Spain. An agreement was reached which minimised Philip's role in English affairs, while providing effectively that unless there was no other direct heir of Philip, Spain and his other continental possessions would not be inherited by any child he and Mary had. If Philip went to war on the Continent, England would not be involved.[2]

Worries about the restoration of Catholicism led to uprisings in the first months of 1554, but these were quelled, with Mary showing her courage in the face of danger.[2]

Mary now actively sought to restore the Catholic faith, but not to restore lands seized from the Church. In February 1555 John Rogers became the first of 283 Protestants to be executed.[4] They were to include Nicholas Ridley and Thomas Cranmer.[2]

Philip II became embroiled in war on the Continent. In 1557 Thomas Stafford, a Protestant exile, sailed from France to try and raise a rebellion, but this was easily suppressed. His attempt did, though, help to create the climate for English intervention in support of Philip. This led to the loss of Calais in January 1558.[2]

From the summer of 1558, Mary became increasingly ill. She put off confirming the future Elizabeth I as her successor until 6 November. She died on 17 November 1558 and was buried in Westminster Abbey.[2] [5]

Images: 3
Mary I by Hans Eworth 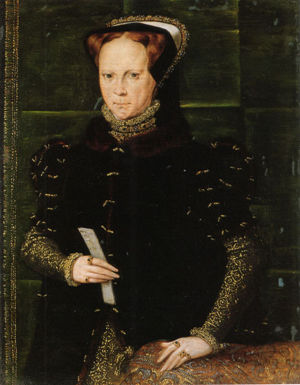 Ancestry of Mary I 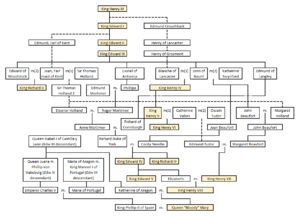 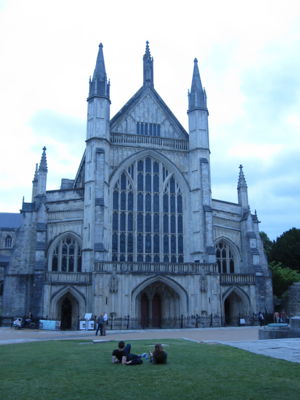 We are 7th cousins 17 x removed . Can’t wait to expand my ancestry knowledge

Jo Fitz-Henry
Hello to all the members of the Trusted List! The England Project has taken over Project Management of this profile from the British Royals and Aristocrats Project as explained in [https://www.wikitree.com/g2g/1095774/england-project-take-management-english-euroaristo-profiles this G2G Please contact me if you have any questions.

Michael Cayley
I have now written a bio for Mary. Please correct any typos etc, and do improve on what I have done.
posted Jun 20, 2020 by Michael Cayley

We are 13th cousins 13 times removed, we are both descendants of Richard (Lucy) de Lucy.