Edward VI (Tudor) of England is a member of the House of Tudor.

Edward VI (b. 12 October 1537 - d. 6 July 1553) became King of England and Ireland on 28 January 1547 and was crowned on 20 February at the age of nine. The son of Henry VIII and Jane Seymour, Edward was the third monarch of the Tudor dynasty and England's first ruler who was raised as a Protestant.

During Edward's reign, the realm was governed by a Regency Council, because he never reached maturity. The Council was led by his uncle Edward Seymour, 1st Duke of Somerset, (1547-1549), and then by John Dudley, 1st Earl of Warwick, (15501553), who later became Duke of Northumberland.

Edward's reign was marked by economic problems, military withdrawal from Scotland and Boulogne-sur-Mer, and social unrest that, in 1549, erupted into riot and rebellion. It also saw the transformation of the Anglican Church into a recognizably Protestant body.

Although Henry VIII had severed the link between the Church of England and Rome, he never permitted the renunciation of Catholic doctrine or ceremony. It was during Edward's reign that Protestantism was established for the first time in England with reforms that included the abolition of clerical celibacy and the Mass and the imposition of compulsory services in English. The architect of these reforms was Thomas Cranmer, Archbishop of Canterbury, whose Book of Common Prayer has proved lasting.

Edward was Henry VIII's youngest child but first heir by the rules of primogeniture, but because he was so young at the time of both his own and his father's death, he had a council of regency ruling for him during his entire life.

His reign was extremely important in the religious conflicts of the time because he was the first truly Protestant ruler of England. He was taught nearly exclusively by Protestants for his whole life. One of the reasons that Protestantism flourished in this time was because of the power that Edward's main advisers had over him.

One of his main advisers was the Archbishop Thomas Cranmer who virtually redesigned the English Protestant service in order to separate it from Catholicism. Cranmer achieved this with acts such as writing the 'Book of Common Prayer' and appointing John Knox as a court Chaplin. The publication of this book caused the Prayer book Rebellion in Cornwall which lead to the slaughter of the Cornish rebels. The Earl of Warwick was another one of Edward's influential advisers. He supported the destruction of Catholic Churches, the forced use of the Book of Common Prayer in all churches, and the burning of all religious rebels. Soon all unauthorized worship was outlawed.

Before Edward died at age fifteen he changed his will so that instead of his Catholic sister Mary inheriting the throne, his Protestant cousin Lady Jane Grey would be crowned queen. Unfortunately for Jane Grey, she was not supported by the English people (because regardless of her religion and Edward's wishes her reign was against English law) who had her declaration of royalty revoked after nine (or thirteen) days. Her cousin, Mary had her executed for treason shortly thereafter.

Edward fell ill in January 1553, and when it was discovered to be terminal, he and his Council drew up a 'Devise for the Succession', attempting to prevent the country being returned to Catholicism. Edward named his cousin Lady Jane Grey as his heir and excluded his half sisters, Mary and Elizabeth. However, this was disputed following Edward's death and Jane was only queen for nine days before Edward's half-sister, Mary, was proclaimed Queen. She proceeded to reverse many of Edward's Protestant reforms, but Elizabeth's religious settlement of 1559 would secure his Protestant legacy.

Sponsored Search by Ancestry.com
DNA Connections
It may be possible to confirm family relationships with Edward VI by comparing test results with other carriers of his ancestors' Y-chromosome or mitochondrial DNA. Y-chromosome DNA test-takers in his direct paternal line on WikiTree: 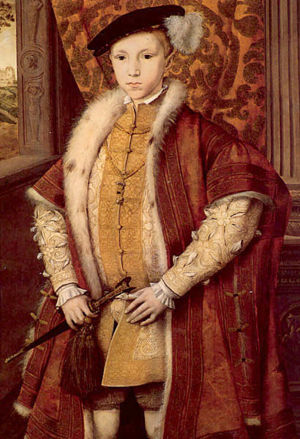 Edward VI is 17 degrees from Jaki Erdoes, 15 degrees from Wallis Windsor and 1 degrees from Henry VIII of England on our single family tree. Login to find your connection.