Lady Mary Tudor was born illegitimately on 16 October 1673 to Charles II Stuart, King of Great Britain and Mary Davies. She m.(1) Edward Ratcliffe, 2nd Earl of Derwentwater, son of Francis Radclyffe, 1st Earl of Derwentwater and Catherine Fenwick, on 18 August 1687, (2) Henry Graham, son of Colonel James Graham and Dorothy Howard, on 23 May 1705 and (3) Major James Rooke, son of Maj.-Gen. Heyman Rooke, on 26 August 1707. She died on 5 November 1726 at age 53 at Paris, France. 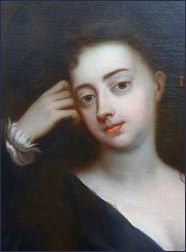