Walter Tullideph was born in Scotland.

''Walter became Dr. of Medicine (Edinburgh University) and went to Antigua to assist his brother David with the running of his plantation and to give medical assistance to the people. By hard work and good husbandry he became one of the most trusted planters in the area, at a time that the Scots were not regarded as a socially advantaged group in the area. He married the heiress of a large plantation, Mary Burroughs of the Tremills Estate. [2]

"With a substantial portfolio producing a steady flow of income Tullideph took time to focus on his previous specialities. Medicine and science were still areas of great interest to the Scottish doctor and determined to contribute to the progress of science Tullideph sent at least two collections of plants from Antigua to Sir Hans Sloane, the renowned collector, in London. The collections were accompanied with notes concerning the medicinal value of the Antiguan plants. Tullideph’s specimens were added to Sloane’s collection and are now to be found in the Natural History section of the British Museum" [3] and [4]

Walter returned to Scotland and lived in Dundee on retirement - his name is commemorated by having streets and buildings named after him.

A relatively detailed description of his life is given in "Settler Society in the English Leeward Islands, 1670-1776" By Natalie Zacek pp 105 -108

In 1760 he was present at a meeting at Forfar where it was agreed that the practice of giving "drink-money" or vails to servants should be abolished. His address was given as Balgay. [5]

Walter Tullideph Dates: 1726-1750 Location: Antigua Title: Doctor Gender: Male Address: Antigua Source Date: 1727 Source Info: Subscribed to The History of Scotland, containing all the historical transactions of that nation, from the year of the world 3619 to the year of Christ 1726, 1727, SCOTT, David. Westminster Subject: history

Walter's will [6]
Walter Tullydeph of Tullydeph Hall, co. Forfar, and formerly of Antigua. Will dated Edinburgh 28 May 1794.
To the Rt. Hon. Geo. Earl of Dalhousie, Geo. Dempster, Esq., of Dunnichin, advocate, Sir John Ogilvy of Invercarity, Bart., Dame Charlotte Tullydeph al's Ogilvy his wife, my 1st dau., Rev. Tho. Tullideph, principal of the United College of St. Andrews, Mr David Tullideph, mercht. at Westbeach, & Rev. Chas. Roberts, minister at Dundee, in trust, all my New Division estate, containing the lands formerly Tremills & Devereux's & the lands I bought of Mr. Wm. York & Capt. Saml. Martin. I have bargained to sell to Mr. Morris of Antigua my Musketto Cove Estate for £18000 st. All other my lands in Antigua & Montserrat & all personalty to my trustees, they to be Ex'ors. To my wife Mrs. Mary Burroughs al's Tullideph £400 a year, the life rent of Tullideph Hall is also settled on her, which will make up £600 a year, & £100 for mourning, 6 cows & 4 horses, use of furniture, then to my dau. Lady Charlotte Ogilvy. To my granddau. Mary Ann Leslie, d. of the Hon. Lt. Col. Alexr Leslie & of Mrs Margt Tullideph, decd, my youngest dau.., £100 a year till 21, then £8000 st.. To Helen Ogilvy, 1st dau. of Sir John Ogilvy, £1000 at 21. To his other children, except the eldest, £4000 amongst the. All my estate to Dame Charlotte Ogilvy for life, then to Walter Ogilvy, 1st son of Sir John Ogilvy. If she die before Sir John then I give him £200 a year, & £300 a year to Walter. Trustees may sell estates .... Recorded at St. John. (The remainder of the will is missing)

Antiguan slave-owner, father of Charlotte Tullideph and father-in-law of Sir John Ogilvy of Inverquharity 5th bart and grandfather of Sir William Ogilvy 8th bart. In Antigua from about 1726 until he became a 'semi-permanent absentee' after 1757, purchasing an estate in Fyffeshire for £10,000.

Owner of New Division (containing lands formerly Tremills and Devereux's and the lands bought from Mr Wm York and Capt. Samuel Martin) and Musketto [sic] Cove which in 1794 Tullideph had agreed to sell to Mr Morris of Antigua for £18,000. After providing for his wife and a handful of monetary legacies he left his estate to his daughter Dame Charlotte Ogilvy for life and then to Walter Ogilvy, son of Charlotte.

Summary of the will of Walter Tullideph of Tullydeph Hall Co. Forfar and formerly of Antigua, dated at Edinburgh 28/05/1794, in Vere Langford Oliver History of Antigua Vol. III p. 156.

Walter Tullideph: There and Back Again?
This paper will look at Walter Tullideph, a young Scotsman who left Edinburgh in the early 1730s to try his luck in Antigua, which was by this time home to a growing and influential Scots community. Tullideph hoped to make his fortune as a merchant, drawing on familial connections in London’s commercial community, but once in the West Indies he became a doctor and “man-midwife” to both planters and their slaves. As an educated man who impressed the local planters with his perspicacity and honesty, within a few years of arrival in Antigua he was asked to serve as a manager and attorney for a number of estate-owners during their extended visits to Britain. Tullideph married an “agreeable Young Widow,” from whom he acquired her late husband’s plantation, and continued to add to these landholdings by purchasing bankrupt estates from over-extended planters. By the 1750s, he was one of the island’s richest and most respected men.
But this paper will look at Tullideph as, in his own eyes, a failure. Although he was happily married, the father of several beloved children, a major landowner and a member of the social and political elite of one of Britain’s most prosperous colonies, he had always intended to return to Scotland, and his letter-books are replete with comments to his brothers and friends at home detailing his plans for reverse migration. Why, then, did this extremely wealthy and financially sophisticated man never succeed in his ambition of coming home? By looking at patterns of migration and communication between Scotland, England, and the Caribbean, this paper will explore the factors which prevented not only Tullideph but other similarly successful Scots from living out their long-cherished dreams of returning to the country which, even after decades overseas, they still considered their homeland.
Note - This is in fact incorrect - Walter did return to Scotland - there are records of him taking part in meetings about the management of the city of Dundee

At the end of the four years, if they behave well, they have moral certainty to get from the gentlemen of the island 25l., 30l, or even 40l sterling, as an overseer to their estates, every year according to their merits and abilities.
Such labouring servants or others who cannot write shall have the same encouragement, only in place of 5l. sterl. they shall have three suits of light cloathing, and one hat yearly, with convenient lodging, during the said term of four years, and at the expiration thereof, 3l. in money.
Those who incline to go may apply to Baillie Alexander Scott, Merchant in Edinburgh, or Mr. Alexander Strahan, Merchant in Dundee, who will treat with them for the Doctor: The Vessel is named the Success, Peter Ogilvy Commander, now lying at Dundee, and will certainly sail the first wek in October, wind and weather permitting. No-one will be received unless they bring a certificate from some gentleman, or the Minister of the parish where they have reside, attesting their honesty and sobriety.
N.B. Such as intend to ship goods, or go passengers in said vessel, may apply to the above named Alexander Strahan or Capt Peter Ogilvy at Dundee.

ask our community of genealogists a question.
Sponsored Search by Ancestry.com
DNA Connections
It may be possible to confirm family relationships with Walter by comparing test results with other carriers of his Y-chromosome or his mother's mitochondrial DNA. However, there are no known yDNA or mtDNA test-takers in his direct paternal or maternal line. It is likely that these autosomal DNA test-takers will share DNA with Walter: 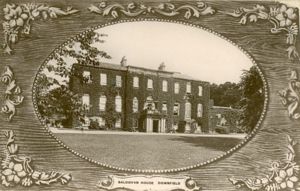 Walter is 20 degrees from Alicia Taylor, 12 degrees from Henry VIII of England and 29 degrees from Rembrandt van Rijn on our single family tree. Login to find your connection.