Euphemia Turnbull was born 10 May 1803, in Scotland, according to her headstone, and census records. She married John T. Wheelock, probably in New York state, around 1819. She moved to Iowa, and lived there with her son until her death in 1883.

At the home of her son, R. U. Wheelock, at Ogden, on the evening of November 10, 1883, Mrs. Euphemia Wheelock, aged eighty years and six months.

The deceased was born in the village of Lilly's Leaf, Scotland. She came to this country with her parents, at the age of 11 years, who settled near Albany, New York. She was married at the age of 17 and became the mother of nine children, six of whom survive her. She was the youngest of 12 children and the survivor of all the family, her brother, Sir James Turnbull, who last proceeded her, having died in London, England, nine years ago. She was buried in the Boonesboro Cemetery, where others of her kin are buried. She was fully ripe and ready for the Reaper.

Euphemia Turnbull is often listed as the daughter of Walter Turnbull and Euphemia Dickson, of Melrose Parish, Scotland. But this is apparently not the case.

These records cited above (and uploaded as images) disprove the frequent assertion that Euphemia Turnbull, wife of John T. Wheelock, was the daughter of Walter Turnbull and Euphemia Dickson.

Unsourced family trees on Ancestry.com cite a birth of 10 May 1803, Innerleithen, Pebblesshire, Scotland. The date probably comes from her headstone, but the source for the location is unknown.

Is Euphemia your ancestor? Please don't go away!

ask our community of genealogists a question.
Sponsored Search by Ancestry.com
DNA
No known carriers of Euphemia's DNA have taken a DNA test. 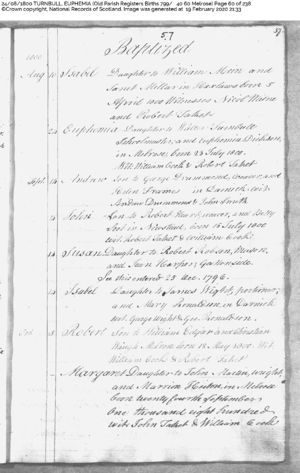 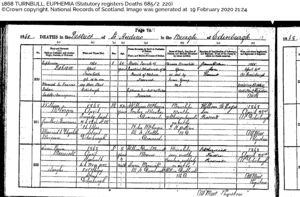