Ellender "Nellie" aka "Ellen" Turner was born in Kentucky about 1810, the third of fourteen children born to William Turner and Elizabeth Crook of Kentucky. About 1827 Nellie married Joel Roberts in Wayne, Kentucky. She was 17 and he was 24. When she was about 27 Nellie and Joel moved with her parents and other siblings to Missouri and settled in Rocky Fork Township in Boone County. They had six children, the first four were born in Kentucky and the two youngest were born in Missouri.

About seven months after their youngest child, Squire was born, Nellie's husband Joel passed away on October 5, 1844 in Hallsville, Boone County Missouri at the age of 41. By 1950 Nellie was living in District 8 of Boone County with four of her six children.

The 1860 census shows Nellie and three of her children, James, Elizabeth and Squire living in Saling Township in Audrain County, Missouri. The value of their land was $300 and Nellie's occupation was listed as a "farmer. Her eldest son William also lived on a farm in Audrain. She lived in Audrain during the Civil War, as Confederate and Union troops passed by her home daily.

William passed away Sep 7, 1876 in Audrain County at the impressive age of 98. It was noted in his obituary that William, throughout all his moves remained a member of the Old Baptist Church for seventy-six years.

Nellie's date and place of death is unknown.

Is Ellender your ancestor? Please don't go away!

ask our community of genealogists a question.
Sponsored Search by Ancestry.com
DNA Connections
It may be possible to confirm family relationships with Ellender by comparing test results with other carriers of her mitochondrial DNA. However, there are no known mtDNA test-takers in her direct maternal line. It is likely that these autosomal DNA test-takers will share some percentage of DNA with Ellender: 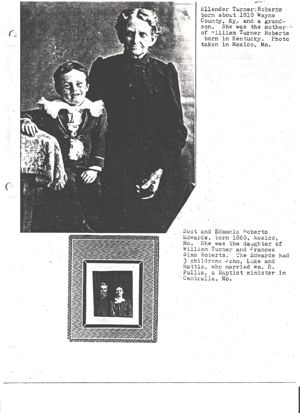