Joseph was born in Maiden Lane, Covent Garden, London, England in 1775 and was baptised on 14 May 1775[1]. Turner himself claimed he was born on 23 April, but there is no proof of that date. His father, William Turner (1745–21 September 1829), was a barber and wig maker. His mother, Mary Marshall, came from a family of butchers. He grew up to be an English Romanticist landscape painter and is now regarded as the artist who elevated landscape painting to an eminence rivalling history painting. His exceptional talents indicate that he "clearly perceived the natural world with a heightened intensity ... and felt strongly connected to it, giving him a sense of awe"[2]. He never married but had a relationship with an older widow, Sarah Danby. He is believed to have been the father of her two daughters born in 1801 and 1811. Later, he had a relationship with Sophia Caroline Booth after her second husband died, living for about 18 years as 'Mr Booth' in her house on Cheyne Walk in Chelsea, where he died of cholera on 19 December 1851. His last exhibition had been at the Royal Academy in 1850. He was buried in St Paul's Cathedral, where he lies next to Sir Joshua Reynolds.

"...The gifted JMW Turner, who, never visiting Australia, died in London in 1851 from something (Westerburg has a copy of his death certificate) called natural decay.[3]

"Great uncle Harry's meticulous findings (she's sent some of them to us) show that Sarah Turner, one of the illegitimate daughters of the artist [ Joseph Mallord William Turner ] (he never married) migrated to Australia in her 20s. She arrived in 1858 and on April 1, 1861, and at something called the Primitive Methodist Church in Newcastle married one Isaiah Hurst. The present suburban sprinklings of people with some JMW Turner blood are the plentiful descendants of Sophia and Isaiah.[3] 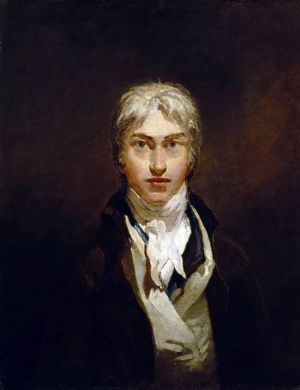 The Fighting Temeraire, tugged to her last berth to be broken up, 1838 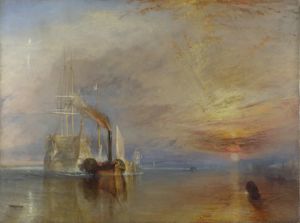