According to Deane and the Hingham history, he was in Hingham, Massachusetts by 1637. This is not likely, because he would have been about ten years old. Anderson puts the birth date for Thomas Turner, son of Humphrey and Lydia (Gaymer) Turner, at about 1627.[1] Thomas was younger than John Turner, the eldest son, who was baptized in Terling, Essex, England, 24 March 1621.[2] Their parent's marriage record is found in the nearby parish of Sandon, Essex, 24 Oct 1618. [2]

According to the Hingham history, "Thomas, had a grant of land in Hingham at 'Goose Point,' 1637. On Apr. 13, 1646, he sold his est. here, consisting of five acres of land with a dw. house thereon, which was located where St. Paul's Catholic Church now stands, to John Otis, Sr., together with two acres in the Broad Cove meadows, and twelve acres beyond Crooked Meadow Bridge, which has previously been granted and laid out to him by the town. In 1659 he complete a contract for finishing a 'barke' at Boston, and prob. removed from here about that time, or shortly after. In 1644 a Thomas Turner was one of four young men who were permitted to build a gallery in the first meeting-house, but whether it was this Thomas or his s[on] is a problem for investigation. Deane's history [of Scituate] says the name aft[erward]s appears in Scit[uate]." [1, 2, 3]

Thomas Turner married Sarah Hiland in Scituate, Massachusetts 6 Jan 1651/2.[1] Thomas is named in the will of his father, Humphrey Turner, "to my son Thomas Turner all my wearing clothes, one wood bed and blankets". [1]

Humphrey Turner is said by Anderson to have immigrated by 1632, first to Plymouth, and removed to Scituate by 1634, with his wife and children. [1] 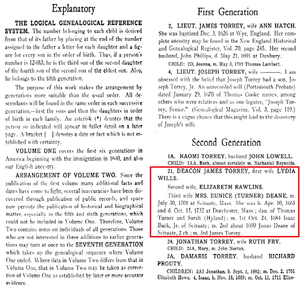 T Stanton
There are question surrounding several of the children attached to these parents. The individual profiles have been noted Unsourced or notes have been left in the Comment Box on those profiles. Most are documented in NEHGS Vital Records of Scituate to 1850 Vol 1.
posted Oct 19, 2019 by T Stanton