Humphrey Turner's last residence before he immigrated to Plymouth, Massachusetts was Little Baddow, Essex, England.[2] Two years after the 1995 publication of The Great Migration Begins, Vol I - III, which included a biography of Humphrey Turner, a detailed study of his wife Lydia Gamer and her origins and their children, authored by Vernon Dow Turner, was published in NEHGR Vol 151 (1997), pp 286. When Robert Charles Anderson published his Great Migration directory in 2015, the entry for Humphrey Turner reads:

He was from southeastern Essex, in the area of Terling and Little Baddow. He was a tanner in New England, and probably learned the trade in Essex.

According to Stratton, he was in Plymouth by 1633, when he appears on the Freemen list, but then moved to Scituate almost immediately afterwards, since he was one of nine men with a house there in Sept. 1634. His daughter was baptized there on 25 Jan. 1634/35. Deane places him in Plymouth in 1628, saying he had a house lot assigned to him in 1629, living there until 1633 "probably, the latter being the date of the laying out of his house lot on Kent street, viz. the 4th lot from the corner of Satuit brook." [3, 6].

Humphrey was a tanner in England. He arrived at Plymouth in 1628, and lived there until 1633, erecting a tannery as early as 1636.

Committee to divide lands in Scituate:

Children of Humphrey and Lydia Turner

"Baptism: 29 Oct 1598 - St. Peter Upon Cornhill, London, England." [citation needed] Probably someone named Humphrey Turner was baptized on said date at said place: if there were any evidence linking it to Humphrey Turner the resident of Plymouth and Scituate, Anderson would have cited it, if only as a possible connection.

Not the son of John Turner of the Mayflower

Although often cited as the son of John Turner, a Mayflower passenger, Humphrey was not. John Turner sailed on the Mayflower with two sons (first names not known). According to Wikipedia, all three died in the first winter at Plymouth, likely between January and March 1621. Humphrey Turner arrived in New England in 1632; ship unknown.

Sponsored Search by Ancestry.com
DNA
No known carriers of Humphrey's DNA have taken a DNA test. 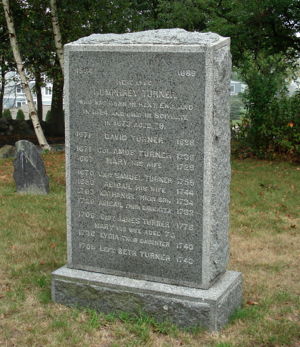 Anne B
Turner-13827 and Turner-40 appear to represent the same person because: Married to same wife. Same death year. Objections from before have been removed
posted Sep 30, 2016 by Anne B
James LaLone
What is the documentation for him being a brother of Nathaniel? The DNA reports do not seem to support those statements - https://www.familytreedna.com/public/turnerdnaproject/default.aspx?section=ycolorized
posted May 31, 2016 by James LaLone

April (Dellinger) Dauenhauer
James, so far as I have been able to discover, the parents of Humphrey Turner are speculative. However, "Lydia Gaymer, the Wife of Humphrey Turner of Scituate, Vernon Dow Turner, NEHGR Vol 151", shows that previous speculation that he is from Essex has been confirmed by finding his children in parish records, so perhaps there is more to these proposed parents?
posted May 09, 2016 by April (Dellinger) Dauenhauer
James LaLone
(Humphrey) TURNER-40 & his wife are the same couple as (Humphrey) TURNER-13827 & his wife, however the two Nathaniels listed as sons are two different people. TURNER 13827 & wife are not the parents of the Nathaniel linked here.
posted Mar 16, 2016 by James LaLone
James LaLone
Please, what is the sources/documentation for Humphrey's parents, thanks.
posted Mar 04, 2016 by James LaLone
[Living Fitzgerald]
Turner-40 and Turner-13827 do not represent the same person because: They are not the same.
posted Feb 28, 2016 by [Living Fitzgerald]

Steven Mix
The 1673 death is highly unlikely, and is probably Ancestry source confusion with Humphrey Turner-40, who was born a generation later, and who was the correct husband of Lydia Gaymer.
posted Jun 25, 2014 by Steven Mix