William Magear Tweed (April 3, 1823 – April 12, 1878) – often erroneously referred to as William Marcy Tweed, and widely known as "Boss" Tweed – was an American politician most notable for being the "boss" of Tammany Hall, the Democratic Party political machine that played a major role in the politics of 19th century New York City and State. Tweed was born April 3, 1823 at 1 Cherry Street, on the Lower East Side of Manhattan. Son of a third-generation Scottish-Irish chair-maker. His parents had been Quakers and "members of the old Rose Street Meeting house. On September 29, 1844, he married Mary Jane C. Skaden, and lived with her family on Madison Street for two years. He died in the Ludlow Street Jail on April 12, 1878 from severe pneumonia, and was buried in the Brooklyn Green-Wood Cemetery.

William worked as a bookkeeper and in 1848 he became a volunteer fireman and as a result acquired influence in his ward. He was an alderman from 1852 to 1853 and sat in Congress from 1853 to 1855. By 1857 he had a lot of power in Tammany. As chairman of the Tammany general committee and later as grand sachem, Tweed dominated the city Democratic party. He also became a state senator in 1868 and moved into state politics. He made many business deals, and by politically serving Jay Gould and James Fisk he became a director of the Erie Railroad. But it was from his control of New York City expenditures that Tweed made his great fortune. For a time the Tweed Ring, consisting of Tweed and his henchmen: Peter Sweeny (city chamberlain), Richard B. Connolly (city comptroller), and A. Oakey Hall (mayor), controlled the city without interference. They defrauded the city of at least $30 million through fake charges and also profited from tax favors. Votes were openly bought and other immoral vote-getting methods were used. City judges became incredibly corrupt. Attempts within Tammany to remove the Tweed Ring failed, and in 1870 Tweed forced through the state legislature a charter that increased the powers of the ring.

Tweed was tried for felony, but the jury could not reach a verdict. In a second trial he was convicted and given a 12-year prison sentence; this, however, was reduced by a higher court, and he served one year. Arrested once more on other charges, he escaped and went to Cuba and then to Spain, but was extradited (1876) to the United States. He died in prison two years later on April 12, 1878 of pneumonia. 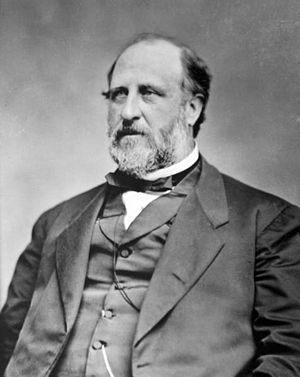 Bob Fields
Could you make Boss Tweed's biography and tree public please, so we can connect him to the rest of Wikitree. Also add template to the biography. Thanks so much. Bob Fields, GFR Notables project leader.
posted Nov 23, 2014 by Bob Fields