Hon. Lemuel J. Tweedie was born in Chatham, New Brunswick on November 30, 1849. He was the son of Irish immigrants, Joseph Tweedie and Catherine McGary.

Lemuel studied law and was admitted into the bar in 1871. He practiced law in Chatham, New Brunswick, where his partner for a while was Richard Bedford Bennett, who would later become the Prime Minister of Canada.

Lemuel first entered provincial politics when he ran for the Legislative Assembly in the 1874 General Election. He was defeated in 1878. He was re-elected in 1886 and 1890, when he became a member of the Executive, as Surveyor General. He was Premier from August 31, 1900 to March 6, 1907. He then became Lieutenant Governor of New Brunswick, holding that position from March 6, 1907 to March 6, 1912.

Following his term as Lieutenant Governor, he resumed a successful law practice.

Lemuel married Agnes Loudoun on December 6, 1876.[1] They had 8 children, 2 of whom died as infants. They raised their family in Chatham.

The family was the subject of society gossip in June 1908, when their 18-year-old daughter Mamie eloped with Lemuel's former coachman. The headlines in the New York Times read "Governor's Child Marries Coachman. Miss Mamie Tweedie, Daughter of New Brunswick's Chief Executive, Elopes. Only 18 Years Old. Crossed Line into Maine to Have Ceremony Peformed - Sailed in Steerage from Montreal for Scotland."[2]

Is Lemuel your ancestor? Please don't go away!

ask our community of genealogists a question.
Sponsored Search by Ancestry.com
DNA Connections
It may be possible to confirm family relationships with Lemuel by comparing test results with other carriers of his Y-chromosome or his mother's mitochondrial DNA. However, there are no known yDNA or mtDNA test-takers in his direct paternal or maternal line. It is likely that these autosomal DNA test-takers will share some percentage of DNA with Lemuel: 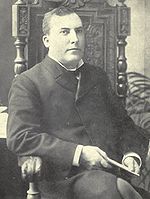