This profile is a work in progress. If you have additions, corrections or suggestions, please leave a message on the public bulletin board of the profile.

John Tyler 10th President of the United States of America

John Tyler John Tyler, Jr. was the tenth President of the United States (1841-1845), and the first ever to obtain that office via succession. He was born on 29 March 1790, in the early years of the newly established nation. He was the first President to be born after the adoption of the Constitution. From birth he was politically tied to his future running mate William Henry Harrison: both were born in Charles City County, Virginia, and descended from aristocratic and politically entrenched families. The Tyler family proudly traced its lineage to colonial Williamsburg in the 17th century. John Tyler, Sr., popularly known as Judge Tyler, was a friend and college roommate of Thomas Jefferson and served in the Virginia House of Delegates alongside William's father Benjamin Harrison V. Judge Tyler served four years as Virginia Speaker of the House before becoming a state court judge. He would later serve as governor and as a judge on the U.S. District Court at Richmond. His wife, Mary Marot (Armistead), was the daughter of a prominent plantation owner, Robert Booth Armistead. She died of a stroke when her son John was seven years old.

A long-time Democrat-Republican, Tyler was nonetheless elected Vice President on the Whig ticket. Upon the death of President William Henry Harrison only a month after his inauguration, the nation was briefly in a state of confusion regarding the process of succession. Ultimately the situation was settled with Tyler becoming President both in name and in fact, and Tyler took thepresidential oath of office on April 6, 1841, initiating a custom that would govern future successions. It was not until 1967 that Tyler's action of assuming full powers of the presidency was legally codified in the Twenty-fifth Amendment.

Arguably the most famous and significant achievement of Tyler's administration was the annexation of the Republic of Texas in 1845. Tyler was the first president born after the adoption of the U.S. Constitution.

Note: Amazingly, two of President Tyler's grandchildren are still living (as of Dec 2018). The former President was 63 years old when his son Lyon Gardiner Tyler was born. Lyon was aged 70 & 75 when his two still living children were born.

Did he commit Treason?

“As president in the early 1840s, Tyler, who was a native Virginian, supported many policies his party did not — states rights and slavery, to name two. Sixteen years after leaving office, when Civil War seemed inevitable, Tyler chaired a peace conference between representatives from the North and South with the goal of keeping the Union intact. When the peace efforts he spearheaded failed, Tyler embraced the Confederacy and urged fellow Virginians to join him. He was eventually elected to the Confederate Congress, which was officially at war with the country he once served.”[4] 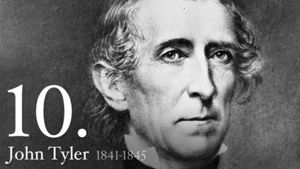 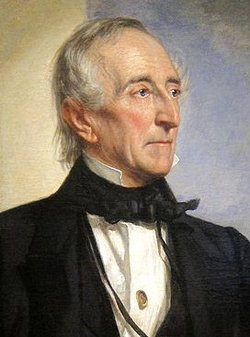 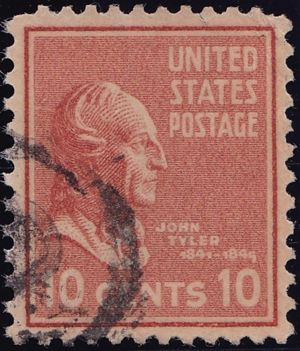 and scroll down to tap on more links to more papers, manuscripts, letters, correspondence, etc https://www.loc.gov/resource/mss43489a.00103/?sp=2

Its only a few paces from Pres. James Monroe's gravesite monument, a unique restored iron cage, and sarcophagus.

Carole Taylor
Do we have sources that prove "Confidence" and can we check the boxes to "Confident" his parentage? Thank you, "Said Cuz'" Carole
posted Dec 19, 2017 by Carole Taylor