Captain Robert Duvall or Langley Tyler, Rev War vet. b. 19 July 1751, Cross Creek, Frederick, Virginia d. 6 April 1815, Tyler's Station, Shelby, Kentucky. He was buried Tyler's Station, Shelby County, Kentucky. His parents: Edward Tyler and Nancy Ann Langley. Captain Robert Duvall or Langley Tyler married Margaret Unknown about 1772 in Virginia. [There is speculation that her name was Margaret Adam, Margaret Ballard, and Margaret Tyler, the daughter of Robert Tyler and Eleanor Bradley; however they were married in 1756 so I disagree with this speculation. Some say her father was Samuel Tyler (no known mother). However, there was a Ballard family at Tyler's Station.] Robert was sufficiently educated to read, write, and do basic arithmetic. Like many frontiersmen, Robert served periodically in the militia during the Revolutionary War and it was perhaps from this service that he gained the title of Captain by which he was nearly always known; as no document has been located to prove the he actually served in that capacity. He took the oath of allegiance on August 27, 1777, along with his brother Moses. By April 1780 Robert and Margaret Tyler were among the first settlers of Boone's Station, which had been erected by Squire Boone. This is where their daughter, Ann Drusilla, was reportedly born. (She would become the great-grandmother of Harry Truman). Robert and his family were among the settlers that were attacked during the Long Run Massacre. Robert was among those that returned the next day to bury the dead when Peter A? Sturgis, the husband of Robert's sister Nancy was killed in a second attack by Indians. This event became known as Floyd's Defeat. It was then that the settlers abandoned Boone's Station. In October of 1782, Robert joined his Militia under the command of Gen. George Rogers Clark for the next four weeks on an Indian campaign. It was in the spring of 1784 that Robert Tyler established Tyler's Station about 5 miles east of present Shelbyville. ( In the winter of 1788, five member of the Bland Ballard family were killed by Indians at Tyler's Station and shortly after that, Tyler's Station was abandoned and Robert and his family continued to live on Tick Creek at the Brashear's Creek Settlement. Shortly before 1793, he moved to his Guist Creek property on the Old State Road. During the 1790's rightful ownership of Robert's property on Tick Creek came into question when Squire Boone confused a tree he had marked for Robert's early survey with one marked for Eli Cleveland. The case lasted until 1803, when the Franklin County Court of Appeals handed down the final decision in favor of Robert Tyler. Robert died and was buried on his Guist Creek property on April 6, 1815. His widow died on October 15, 1840. She was buried beside her husband . [Robert and Margaret's 1st child Robert is the great-great-great grand father of the 46th vice-president, Richard Bruce Cheney.] [Robert and Margaret's 4th child Nancy is the great-grandmother of the 33rd president, Harry S. Truman.] Their children: 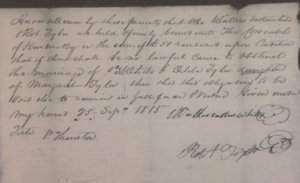 Leave a message for others who see this profile.
There are no comments yet.
Login to post a comment.
[Living Martin]
Corrected the birth date from July to August. My data entry error.
posted Dec 09, 2018 by [Living Martin]

Robin Lee
Per SAR and DAR records, his birth was August 19, not July 19. Please supply your source for the information.
posted Dec 09, 2018 by Robin Lee

Robin Lee
Tyler-4003 and Tyler-8 appear to represent the same person because: same parents and wife, birth is off by exactly one month
posted Dec 09, 2018 by Robin Lee