"Kamehameha III (born Kauikeaouli) (March 17, 1814 – December 15, 1854) was the third king of the Kingdom of Hawaii from 1825 to 1854. Under his reign, Hawaii evolved from an absolute monarchy to a constitutional monarchy with the signing of both the 1840 Constitution, which was the first Hawaiian Language Constitution, and the 1852 Constitution. He was the longest reigning monarch in the history of the Kingdom, ruling for 29 years and 192 days, although in the early part of his reign he was under a regency by Queen Kaʻahumanu and later by Kaʻahumanu II. His goal was the careful balancing of modernization by adopting Western ways, while keeping his nation intact." [1]

6 Jun 1825: assumed Kingship from his deceased older brother, Kamehameha II (under regency until 1832).

c. 1840: moved the capital from Lahaina, Maui to Honolulu, Oahu.

1840: signed the 1840 Constitution, establishing a constitutional monarchy with elected legislature.

"The age of Kamehameha III was that of progress and of liberty—of schools and of civilization. He gave us a Constitution and fixed laws; he secured the people in the title to their lands, and removed the last chain of oppression. He gave them a voice in his councils and in the making of the laws by which they are governed. He was a great national benefactor, and has left the impress of his mild and amiable disposition on the age for which he was born." [3]

1865: Kamehameha III was reburied in the Royal Mausoleum of Hawaii known as Mauna ʻAla.

Is Kauikeaouli your ancestor? Please don't go away!

ask our community of genealogists a question.
Sponsored Search by Ancestry.com
DNA
No known carriers of Kauikeaouli's DNA have taken a DNA test. 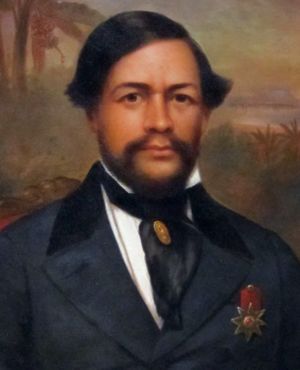 Categories: Hawaii, Notables | Notables | Monarchs of the Kingdom of Hawaii