Stanislaw Marcin Ulam was a Polish-American mathematician. He participated in America's Manhattan Project, originated the Teller–Ulam design of thermonuclear weapons, invented the Monte Carlo method of computation, and suggested nuclear pulse propulsion. In pure and applied mathematics, he proved some theorems and proposed several conjectures.[1]

In early 1943, Ulam asked von Neumann to find him a war job. In October, he received an invitation to join an unidentified project near Santa Fe, New Mexico. The letter was signed by Hans Bethe, who had been appointed as leader of the theoretical division of Los Alamos National Laboratory by Robert Oppenheimer, its scientific director. This was Ulam's introduction to the Manhattan Project, which was the US's wartime effort to create the atomic bomb.

Stanislaw immigrated to the United States from Poland on the ship Georgic sailing from Harve on Aug 21, 1937 and arrived at the port of Ellis Island, New York, New York on Aug 28, 1937. He became a naturalized U.S. Citizen on Apr 2, 1943 in Madison, Wisconsin. He died on May 13, 1984 in Santa Fe, Santa Fe County, New Mexico, USA. He is buried at the Cimetiere de Montparnasse, City of Paris, France.[5]

Is Stanislaw your ancestor? Please don't go away!

ask our community of genealogists a question.
Sponsored Search by Ancestry.com
DNA
No known carriers of Stanislaw's ancestors' DNA have taken a DNA test. 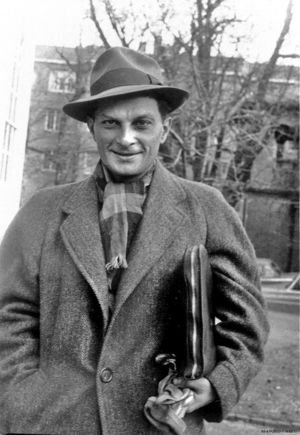