Born to a wealthy middle-class family in Simbirsk. Lenin's father, Ilya Nikolayevich Ulyanov, came from a serf background but had studied physics and math at Kazan State University, going to teach at the Penza Institute for the Nobility. Lenin's great-grandfather was a serf, and he married Anna Alexeevna Smirnova, a baptized Kalmyk. He was introduced to Maria Alexandrovna Blank; they married in the summer of 1863. Hailing from a relatively prosperous background, Maria was the daughter of a Russian Jewish physician, Alexander Dmitrievich Blank, and his German-Swedish wife, Anna Ivanovna Grosschopf. Dr. Blank had insisted on providing his children with a good education, ensuring that Maria learned Russian, German, English and French, and that she was well versed in Russian literature. Soon after their wedding, Ilya obtained a job in Nizhni Novgorod, rising to become Director of Primary Schools in the Simbirsk district six years later. Five years after that, he was promoted to Director of Public Schools for the province, overseeing the foundation of over 450 schools as a part of the government's plans for modernisation. Awarded the Order of St. Vladimir, he became a hereditary nobleman. Ilya Ulyanov died of a brain haemorrhage in January 1886, when Vladimir was 16.

Throughout his adult life, Lenin was in a relationship with Nadezhda Krupskaya, a fellow Marxist whom he married.

In May 1922, Lenin suffered the first of three strokes. In December 1922, he suffered the second stroke. In March 1923, he suffered a third stroke; it ended his career. Lenin was mute and bed-ridden until his death. Lenin died at 18.50 hrs, Moscow time, on 21 January 1924, aged 53, at his estate at Gorki settlement. Lenin was embalmed and permanently exhibited in Lenin's Mausoleum, in Moscow, on 27 January 1924, where it still remains, unburied.

Is Vladimir your ancestor? Please don't go away!

ask our community of genealogists a question.
Sponsored Search by Ancestry.com
DNA
No known carriers of Vladimir's ancestors' DNA have taken a DNA test. 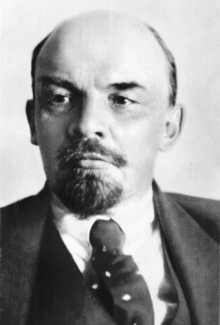 Leave a message for others who see this profile.
There are no comments yet.
Login to post a comment.
Andreas Zerbst junior
so - Lenin-2 and Ulyanov-2 are now merged - the confusion was the german transcription vs. international transcription and what is first, middle and last name. In Russia the first name is like in other europien states - but the second (middle) name is the name of the father with a little bit of grammar - and the last name is also like in other europien states - but V.I.Ulyanov has a synonym: LENIN - and this is better known in the world as his birthname Ulyanov.
posted Jan 27, 2019 by Andreas Zerbst junior

Christine Henderson
please merge with Lenin-2. "Nikolai Lenin" is the well-known alias of Vladimir Ilyich Ulianov.
posted Jan 27, 2019 by Christine Henderson
Andreas Zerbst junior
Lenin-2 and Uljanow-2 appear to represent the same person because: Uljanow-2 is Wladimir Iljitsch Uljanow aka Lenin. The System found no match automaticly because Lenin-2 has not the right surname Uljanow - isn't so?

posted Aug 30, 2018 by Andreas Zerbst junior
Summer (Binkley) Orman
Key word is "today." He was, at one point, very much a terrorist. The definition may be fluid, but that fact is not.
posted Jun 27, 2018 by Summer (Binkley) Orman
[Living Moore]
This person does not fit the category of terrorist that is used today.
posted Jun 27, 2018 by [Living Moore]
[Living Milne]
Could you please add this to the Russian Roots category thanks.
posted Jun 19, 2017 by [Living Milne]