William Underwood was born in York County, Pennsylvania in 1776. His parents were Zephania Underwood and Rebecca Lewis, members of the Quaker Church. William was the great grandson of Alexander Underwood who was a Quaker minister for twenty two years. In 1800 William married Deborah Kirk who was the daughter of Ezekiel Kirk and Hannah Crookham. Deborah was born in Pennsylvania in 1781. Within seven years William and Deborah became the parents of five children including twin daughters. They were Ezekiel (1801-1856), Rebecca (1803-1880), William (1805-1855), Deborah (1807-1852), and Hannah (1807-1837).

Apparently his wife Deborah died by 1817. In November of 1817, William asked for the certificate of membership of four minor children, namely Ezekiel, Rebeckah, Hannah, and Deborah Underwood to be moved to Centre MM in Clinton, County, Ohio. Son William would have been twelve years old at the time. It appears that he was left in Pennsylvania when his father and siblings made the move to Ohio. About 1834, son William married Hannah Aller in Pennsylvania. By 1840 son William. and his family were living in Knox County, Ohio. Daughter Rebecca married Elijah Taylor in late1817; so her father had one less minor child to care for. Deborah Kirk Underwood's parents likely helped William get established and helped with the three minor children who were still dependent on him when they made the move to Ohio. In 1812 Deborah's father, Ezekiel Kirk, had requested a change of membership for himself and wife Hannah plus four minor children, William, Sarah, Tim, and Mahlon for the Centre MM in Clinton County, Ohio.

All eight of William's children lived to adulthood. Everyone married and had families of their own. 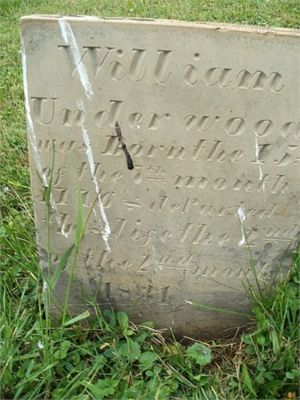