There is lack of agreement about her maiden name. The theories are as follows:

Her grave site is reportedly the oldest in the Old First Church (Indian River) Cemetery. Marked only with "M.G. 1670", it is believed to be the burial place of Margaret Griswold, wife of Killingworth (now Clinton) settler Edward Griswold. Several birth surnames have been posited for Margaret, most frequently HICKS, but all have been discredited in family literature.[5]

There are no actual records of her birth or marriage, and her maiden name remains unknown.[6] [7]

According to the Griswold Family Association, who have done extensive research, and "The Griswold Family: 12 Generations in England" 1999, p. 54, Edward married Margaret [__?__] about 1628 in England. She was born about 1609. Margaret died 23 Aug 1670 in Killingworth, Middlesex, Connecticut…

NOTE: THE NEXT TWO PARAGRAPHS ARE PENDING INFORMATION THAT WILL BE UPDATED LATER: About Aug. 17, 1639, Rev. Ephriam Huit arrived in Windsor, Connecticut with his company. He had been pastor at Warwickshire, England of the Kenilworth Parish and of the Puritan faith. He was censured and silenced which was the moving cause of his organizing his company and for his removal to New England. Edward and Matthew Griswold were members of this company. Edward and Margaret Griswold arrived in America in 1639 with their growing family. (The Griswold family : England-America, Vol. II. about Edward Griswold) 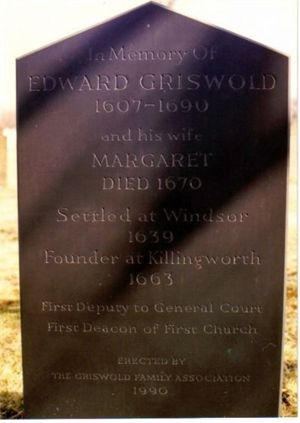 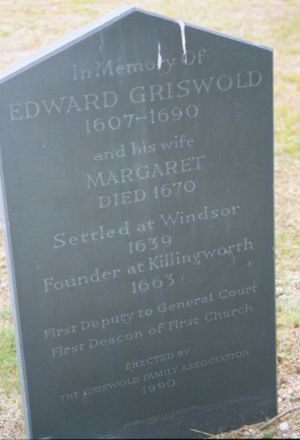 Linda (Carruth) Peterson
N.n.-32 and Unknown-221279 appear to represent the same person because: There is minimal source and information on N.n.-32 profile. Death and burial information is the same. Birth year is approximately the same, no other relatives, it looks like it is the same person. Nothing on the biography of N.n.-32 probably should be brought forward in the merge.
posted Apr 15, 2020 by Linda (Carruth) Peterson

Kay (Johnson) Wilson
There are some serious problems with this profile. Her birth info in the data section is 5 Aug 1631 in Ilmington, based on a christening record from Family Search, but the text of her biography says she was born about 1609. She is shown as the daughter of Isaack Hicks-11193, but the biography says that her maiden name is unknown. She is shown as the mother of Sarah Griswold-1601 who was born in 1663, but that would have made Margaret 54 at Sarah's birth which is not possible. And her spouse is shown as Edward Griswold-232 (1632-1690) a profile whose only source is an Ancestry tree, while her actual husband is Edward Griswold-33 (1607-1691), the man listed as the father of Griswold-232. And there is already a profile for the wife of this Edward Griswold-33, Margaret Unknown-221279.
posted Mar 07, 2019 by Kay (Johnson) Wilson

Christopher Childs
No problem, Leigh Anne -- glad to have you looking after her.  :o) I'm a PGM project member; if you want to add me to the Trusted List for Blencow-7, I may be able to handle the merge.
posted Jan 04, 2019 by Christopher Childs

Christopher Childs
Margaret's an ancestress... Jillaine, I could adopt (orphaned) Blencow-7 if that would facilitate the merge. (That profile, as Leigh Anne indicates, is barren and doesn't have any info to offer; but I'm assuming the merge ought to be in the direction of Unknown-22179 in any case, even if the other profile did have info.)
posted Jan 04, 2019 by Christopher Childs