Luis was one of two Miwok Native Americans who were guides for the infamous Donner Party in 1846. The Donner Party was trapped in the Sierra Nevada Mountains by snow for 111 days.

Luis and Salvador were two Native Americans who were guides for the Donner Party. They left with the Forlorn Hope, a party of 17 men, women, and children who set out on foot in an attempt to cross the mountain pass. When Patrick Dolan died some of the group began to eat flesh from Patrick Dolan's body, except for William Eddy, Salvador and Luis. William Eddy eventually ate human flesh, but that was soon gone. They began to take apart their snowshoes to eat the oxhide webbing, and discussed killing Luis and Salvador for food. William Eddy warned the Native Americans and they left. After several more days and 25 days since they had left Truckee Lake, they came across Salvador and Luis, they had not eaten for nine days and were very weak and dying. William Foster shot Salvador and Luis for food. They are the only two from the Donner Party that were definitely known to have been killed for food.[1] 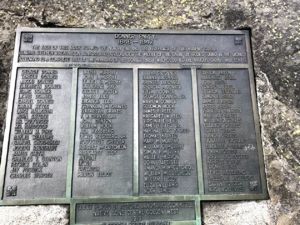