Isabelle appears in the 1930 census with husband and infant daughter, in Pittsford, NY[2]

Is Isabelle your ancestor? Please don't go away!

ask our community of genealogists a question.
Sponsored Search by Ancestry.com
DNA
No known carriers of Isabelle's DNA have taken a DNA test. 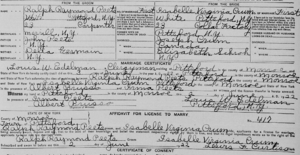 Leave a message for others who see this profile.
There are no comments yet.
Login to post a comment.
Helen (Bowden) Edwards
Would it be possible for you to change last name at birth from Unknown to Crum re sources in Biography

Bruce Veazie
Someone on Trusted List should change Isabelle's LNAB to Crum, per the reference. See image of marriage certificate.
posted Aug 22, 2015 by Bruce Veazie