Profile last modified 4 Oct 2019
This page has been accessed 12 times.

Louisa Ann was born in about 1789 in Chelsea.

Louisa married Robert M. Smith, who was (or became) a Captain in the Royal Artillery.

Their daughter Hester Smith was born in about 1810 in St Kitts, West Indies.

By 1861, Louisa was widowed and living in Godalming with Hester and their friend Juliana Elizabeth Louisa Panchard. Hester and Juliana were running a Berlin repository together, with Louisa assisting. This was "a shop-cum-warehouse selling Berlin wool work which was cheap machine-made tapestry pictures or patterns in woollen cloth, used to make chair covers, fire screens, etc. It also supplied kits to make them for yourself."[1]

By 1871, the shop was described as a "fancy repository". Such shops sometimes also sold Berlin work, so it may not have represented a complete change of approach. A Fancy Repository in Wales advertised itself as selling "watches, clocks, silver plate, jewellery, china, glass, lamps, cabinet goos, papier machie ditto, electro plate, superb Bohemian glass ornaments, jet goods in endless variety, and every description of fancy articles suitable for presents".[2] This conveys the general idea.

Louisa died on 2 Jun 1872, aged 83, at her home in Godalming High Street. She was buried on 8 Jun 1872 in Nightingale Cemetery, Godalming, in the consecrated section.

Memorial Inscription
In
Affectionate Remembrance of
Mrs. Louisa Ann Smith
Widow of
Captain Robert M. Smith
of the Royal Engineers
who entered into rest
June 2nd 1872
Aged 83
-+-
She is not dead but sleepeth.
-+-
Hester Smith
Daughter of the above
Died August 26th 1885
Aged 75 years.

No probate record found for Louisa on FindAWill, 1872-3. 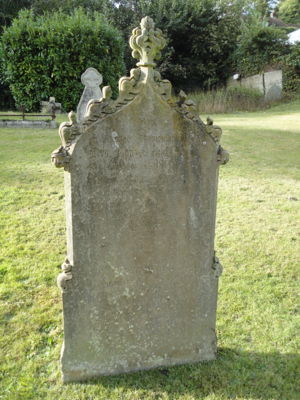 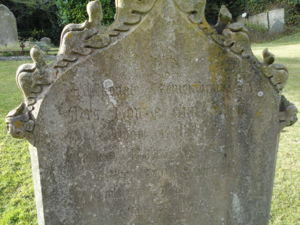 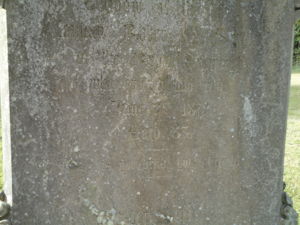 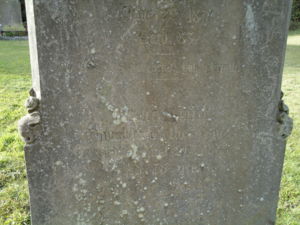