Kenneth Eugene Upshaw passed away Thursday April 12, 2012 at Whitman Hospital and Medical Center in Colfax, WA at the age of 79. Ken was born August 24, 1932 to Harold and Hellen Upshaw in the back bedroom of the family home on their farm south of Colfax. He started grade school at Albion and later began attending the Hamilton grade school in Colfax after the schools consolidated. He attended Colfax High School, graduating in 1950. Ken was active in 4-H and FFA with a strong interest in raising cattle. During his early adult life, he and his father ran a herford cattle ranch and Ken was awarded "Cattleman of the Year" by the Washington State Cattlemen's Association in 1959. During this time Ken also traveled the western United States, showing prize bulls at major livestock shows and made many friends and had many adventures during his travels. Ken married the love of his life, Martha "Fritzie" Findler on June 7, 1958 in the living room of Fritzie's mother's home on Thorn street in Colfax. The young couple soon moved to a farm in the Onecho area where they farmed, raised cattle, and raised their 2 children. Ken also operated the Upshaw Tractor Cab Co. and built cabs and implement hitches for farmers throughout the inland Northwest. The family moved to Colfax in 1968, and made their home there until today while still farming in Onecho. While farming was Ken's passion, his other interests included collecting antique cast-iron toys and scale replicas of farm equipment. He also enjoyed traveling the West and Canada with his wife in the family's motorhome. Another of Ken's favorite things was to follow the local sports teams on radio, listening to his son Jim call the play-by-play. Ken was fortunate to be able to work hard at a job he loved right up to the end of his life, while also being a dedicated and loving husband, father, and grandfather. He also enjoyed his new title of great grandfather and had been looking forward to the arrival of a new great grandson. Ken is survived by his wife Fritzie and son Jim Upshaw of Colfax, daughter and son-in-law Shelly and Jim Stewart of Albion and grandson Dustin (Melissa) Stewart, great granddaughter Lucinda and soon-to-be great grandson Connor, all of Kirkland. A memorial service will be held Saturday April 21, 2012 at the Onecho Bible Church at 2 p.m. Private family burial will follow at the Onecho cemetery. The family suggests that memorials be gifts to the Northwest Chapter of the Alzheimer's Association or the Whitman County Humane Society. Bruning Funeral Home is caring for the family. Online condolences can be made at www.bruningfuneralhome.com [1]

ask our community of genealogists a question.
Sponsored Search by Ancestry.com
DNA
No known carriers of Kenneth's ancestors' DNA have taken a DNA test. 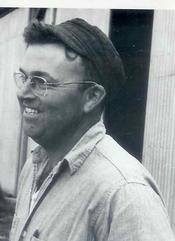